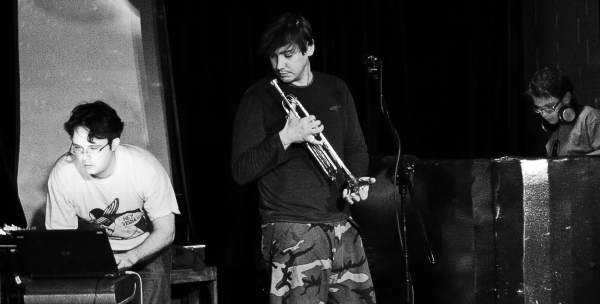 kIRK is a Polish collective that includes Pawel Bartnik (electronic instrument), Olgierd Dkalski (trumpet), and Filip Kalinowski, (turntables). They clearly love the art of mixing different components. Their PR blurb talks about Mary Anne Hobbs, techno, and Si Begg, but I believe this is actually (even if it wasn’t known) a more recent version 23 Skidoo and Rip, Rig and Panic, which are two bands you should know ….. kIRK is a product of the same industrial wasteland that these two bands came from. Many people can identify with the music’s industrial soundscapes. The music is minimalist and dark, using the trumpet to provide a melodic foil to the percussive sounds of the two “sound men”. According to what I have read, the music was improvised and built from simple structures. The music’s minimalist aspect is evident from the beginning. from http://polish-jazz.blogspot.com For over a decade kIRk has been consistently strengthening its position in the underground world. Their music has become a worldwide phenomenon, extending beyond Poland’s borders. kIRk is a band who doesn’t compromise. They are a band that has a mission. They don’t care about the latest fashions and trends. They are interested in the sonic potentials and limitations of multiple genres. It’s all about big issues that today often seem obsolete. This is a rich development and dedication to the sound. kIRk are slowly occupying new areas of the musical no man’s land, and annexing them on their terms. Si Begg, British “techno” giant and owner of Tresor club, and organizers of festivals like Open’er, Nowe Horyzonty and Satta Outside, has praised the band’s innovative thinking and revolutionary attitude. The band has always surprised its listeners since its inception. To the point that many felt uneasy, to be honest. It is better to not expect stylistic stability from the kIRk board. They continue to impose new conditions on their listeners and themselves. Although it’s not always easy, isn’t the insight into the future worth the effort. Soundcloud.com