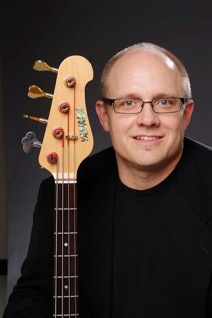 Kris Berg is a top-selling arranger and composer of jazz music. He has been enriching the recordings and programs of jazz ensembles, from professional to middle school students, for many years. His charts are very popular in the United States. However, there are many groups around the world who enjoy playing them. He is a composer/arranger for Belwin Jazz, a Division of Alfred Publishing. He has created charts for many artists including Kurt Elling and Chris Vadala. His “chicken” funk tunes are a hit and have been sold in tens of thousands. Kris is also the author of BASS LINES in MINUTES, a popular book on bass technique. He has big band charts published by Warner Brothers Music and Walrus Music. Kris’ latest project as a composer/band leader is now available. “Time Management” is The Metroplexity Big Band’s impressive follow-up CD “This Time/Last Year”, which was critically acclaimed. The CD features some of the most talented musicians North Texas has to offer. It also includes special guests Clay Jenkins, Clay Woods, Denis DiBlasio and Andy Timmons. Nine smokin’ hot charts featuring originals and original arrangements are featured on “Time Management”, a collection of originals and arrangements for fans of contemporary big band. The songs include “Yesterdays”, Narnian Dance, and “The Chicken”. Kris is the Collin College Director of Jazz Studies near Dallas. He has served this role for nearly 20 years. He teaches and directs ensembles at Collin College. He is also the founder of the Collin Jazz Fest as well as the Texas All-Star Jazz Camp. His direction has seen Collin’s jazz ensembles perform multiple times at Montreux Jazz Festival, Switzerland. The band has performed at festivals across the United States, including Nassau, Bahamas and Nassau. Kris received his Master’s degree and Bachelor’s of music in Jazz Studies from the University of North Texas. He directed and taught big band arrangements and led jazz ensembles. Kris is an award-winning bassist who has recorded or performed with such artists as Phil Woods and Kurt Elling, Kurt Elling. He is currently an artist/clinician for Yamaha Corporation of America. He has performed at many jazz festivals and camps across the United States. He is also endorsed and supported by Acoustic Image Amplifiers, Bag End Loudspeakers, and Kim Richmond. Kris Berg recently joined the Yamaha Corporation of America.