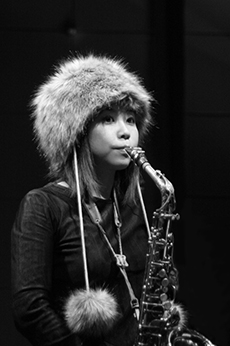 Kyoko began playing the alto saxophone at Yokohama National University. Participating in the university’s jazz club, she learned jazz theory and how the alto saxophone works on her own. She began private lessons with Atsushi Iteda, a Japanese jazz saxophonist. The University awarded her a Bachelor of Arts in Liberal Arts. She was awarded the Berklee Scholarship Scholarship by the Rotary Foundation. She was a Berklee jazz composition major. She studied composition and arrangement under the tutelage and guidance of Ted Pease, Greg Hopkins and Phil Wilson (Grammy nominee). She also studied saxophone under the tutelage of Frank Tiberi and George Garzone, as well as performance with Dave Santoro and Ed Tomassi. She also conducted with Valerie Taylor. Two Berklee awards have been given to her: the “Toshiko Akiyoshi Award”, and the “Woodwind Department Achievement Award” for outstanding composition and performance. She has appeared at many Jazz Festivals, including the JVC Jazz Festival. After graduated from Berklee, she moved to New York City, she played many gigs, offered compositions/arrangements for various styles of bands, instructed from teenagers to elderly people in both New York and the Boston area. She is now a very active performer and composer in Tokyo. She leads her own orchestra and small band. Visit www.kyokosatoh.com