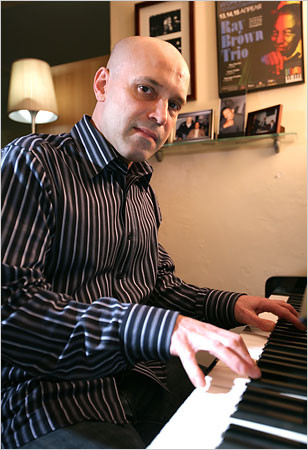 LARRY FULLER is a jazz pianist of international standing who remains firmly grounded in the hard-swinging tradition of mainstream jazz. Larry Fuller was born in Toledo, Ohio. He began musical studies at 11 years old and quickly showed an aptitude for jazz. Candy Johnson, a veteran of both the Count Basie Orchestras and Duke Ellington Orchestras took Larry under her wing and hired him for regular, paid gigs when he turned 13. He was a regular performer on the Midwest jazz circuit, performing alongside big-name artists. Larry started working with Ernestine Anderson in 1988. He moved to Seattle as Ernestine’s pianist/musical director. Through 1993, he traveled, performed, recorded, and was nominated for a Grammy. Larry joined the hard-swinging trio of drummer Jeff Hamilton in 1994. He was a 12-year Ray Brown Trio/L.A. 4 associate and a member the bands Gene Harris, Woody Herman and Concord All-Stars. Larry was a member of the trio that toured the US and Europe and recorded many CDs. He also worked his way up the ranks in the jazz scene. Larry began to play with some of the most revered jazz all-stars through his touring and jazz party performances. He also made several guest appearances alongside Ray Brown, an exciting and well-respected bassist. Larry joined Ray Brown Trio in April 2000. Ray’s role in jazz history is well-known, starting with his days with Dizzy Gillespie’s bigband, continuing with his association with Oscar Peterson, and his hard swinging groups. Ray and his trio traveled the world almost year round. Larry was Ray’s final pianist and performed with Ray until 2002. Larry joined the John Pizzarelli Quintet in October 2005. They now tour the United States, Europe, and Japan performing classic jazz, swing, and jazz, and setting the standard for modern jazz. Larry Fuller has been a performer with Ray Brown and Harry “Sweets” Edison. He also performed with Clark Terry, Marlena Shaw (Kevin Mahogany), John Clayton, John Heard. John Heard, Bennie Golison, Emily Remler. Jeff Hamilton, Jimmy Witherspoon. Ernestine Anderson, Steve Allen, Regina Carter, Nicholas Payton, and many others. Fuller continues to perform at jazz parties, festivals, and clubs around the globe–North, South, Europe, Asia, and Europe. from http://www.larryfullerjazz.com/