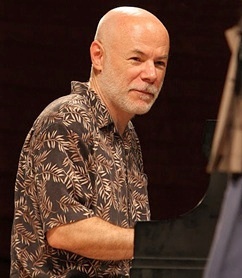 Larry Ham, pianist, composer and arranger, is an experienced New York sideman who has performed, toured and recorded with many great jazz musicians. Internationally acclaimed, his recordings include “Carousel”, featuring his compositions and trio arrangements, as well as a solo piano release entitled “Just Me, Just You …”” on Arbors Jazz Records. Both can be found on the “CDs” page. David Dupont, Cadence Jazz Magazine’s editor, writes that Larry started his professional career in late ’80s in the Lionel Hampton Orchestra. He was a pianist in the Illinois Jacquet Big Band from 1990 to 1995 and has collaborated extensively with many other jazz legends such as Junior Cook and Dakota Staton. He has performed at numerous jazz festivals, concerts, and nightclubs in the United States, Europe and West Africa. Recent appearances in New York include Jazz at Lincoln Center and Carnegie Hall, Iridium. Small’s, The Village Vanguard. Small’s, The Kitano Hotel and Harlem’s historic Lenox lounge. He has performed at jazz festivals such as the Grande Parade du Jazz, Nice, France, The North Sea Festival, The Hague, Holland and Jazz Yatra, Bombay, India. He performed at the White House in support of President Reagan, and at President Clinton’s 1992 Inaugural Ball. Larry was featured in the jazz film “Texas Tenor”, and has appeared on television programs such as “The Today Show” (NBC), “Breakfast Time (FX), and “Jazz Set With Dee Dee Bridgewater”. He also performed in concert and led workshops on jazz playing in West Africa in 2001-02. Larry was a United States Department of State Jazz Ambassador. He was the pianist and musical director of the New York Tapdance Festival from 2002 to 2005. He also toured the United States, Russia, Greece, and Italy. He has performed extensively throughout the US in recent years, including in Japan, Canada and England. He performed with Catherine Russell at the Kennedy Center, Zankel Hall (Carnegie Hall), and Prague, Czech Republic. Recent festival appearances include The Montreal Jazz Festival and The Rochester Jazz Festival. The Cape Cod Jazz Festival, New Jersey JazzFest and a performance at The West Texas Jazz Society. Larry holds a BA degree in Musical Studies from SUNY Potsdam’s Crane School of Music, as well as a MA in Jazz Performance from Queens College’s Aaron Copland School of Music. He is currently an instructor at Dutchess Community College, Poughkeepsie, NY; The College of St. Rose, Albany, NY; and Bard College, Annandale-on-Hudson. http://larryham.com