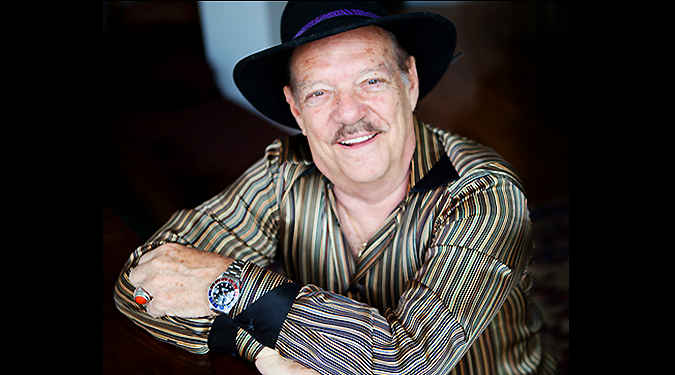 Larry Harlow is an Afro-Cuban legend. His father Buddy, a professional bass player, and Rose, a singer opera, were his first influences. He graduated from the prestigious N.Y. High School of Music and Art. He excelled at flute, violin, bass, and the instrument he is most famous for, the piano. While jazz and Art Tatum’s piano playing were his first love, he was drawn to the New York Latino culture and music as a teenager. In the late 1950s, he traveled to Cuba to study Afro-Cuban music. He spent two years studying everything from popular dance styles to liturgical traditions based on West African culture. He quickly established himself as a leading bandleader upon his return to New York and was signed by Fania Record Company. This is the most important Latin music label in history. His colleagues affectionately call him “El Judio Maravilloso” because he revolutionized the concept of “SALSA.” In the 70’s Harlow created the powerful, explosive Tumpet/trombone sound that is now used by salsa bands. Harlow was the first person to introduce the Yoruba religion’s sacred bata’ drums to secular Afro-Cuban music in NYC. Harlow, also known as IFA’, La Regla de Ocha or as Santeria to the lay populace, began to study its secrets and was eventually baptized as Ochun, the Yoruba deity for the river, shekere, and love. Harlow was an audio engineer at the Institute of Audio Research, NYC in the 1970s. He went on to become the most prominent Latin Record producer in the entire world. Fania Records alone, Harlow has produced more than 260 CDAs and was a leader in over 50 cdAs. He is the Grammy nominee Masterpiece, “La Raza Latina a Salsa Suite”, in 1978. This first serious treatment of this genre traces the musicAs Diaspora from West Africa through Southern Spain, New York City, and even the original Latin Opera “Hommy”, which was performed to SRO audiences for two shows at Carnegie Hall, and two shows in Puerto Rico. The opera will be revived in 2008 by Fania Records in San Juan, Puerto Rico. A new Coliseo has been established with an updated cast. Also, a new CD and HBO special are being recorded. Harlow is also the pianist/producer for the Fania All-Stars. Harlow recorded more than 60 CD’s with the All-Stars, and helped spread clave consciousness around the globe. He also wrote the music and co-produced “Our Latin Thing” as well as starring in “Salsa”, which are two of the most important documentaries about Afro-Cuban music in New York City. As the music producer, he also appeared in “Fania in Africa”. Maestro Harlow composed music for “SOFRITO”, which was a bilingual multimedia musical featuring storyteller David Gonzalez. The show was sold out at the New Victory Theatre, Broadway, and throughout the Americas. It features ancient Caribbean folk stories with live performances by Harlow’s Latin Legends Band on stage. This CD can be purchased on Laughing Horse Records. As a Governor of NARAS’ NY chapter, Mr. Harlow was responsible for bringing attention to Latin music by the National Academy of Recording Arts and Sciences. They established the first Latin Grammy Award and 12 Latin Categories. He has been nominated for a Grammy three times. He has a Bachelor’s degree in music from Brooklyn College, and a Masters Degree of Philosophy from New School of Social Research. Harlow is a regular speaker and artist in residence at Harvard, Yale, and all California State Universities. Larry Harlow’s Latin Jazz Encounter, “Live at Birdland”, was released on January 23, 2003 by LATIN COOL. This marked the beginning of a new phase in Harlow’s career, LATIN JAZZ. They can be found at all jazz festivals around the world. Harlow just released a double CD/DVD from his 35th anniversary concert at Tito Puente Ampitheater, San Juan, Puerto Rico. It will be available in spring 2006. His 40th anniversary Latin Legends of Fania just came out on dvd and cd. Larry Harlow was awarded the 2008 Latin Grammy TrusteeAs Award in Houston by Univision Television Network on November 13th. From www.larryharlow.com