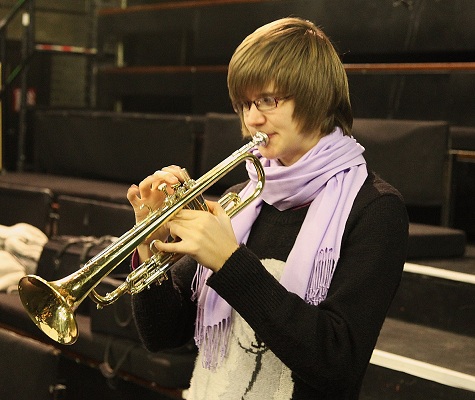 Editor’s Note: To find more albums featuring Laura Jurd, see the entry for Dinosaur. Laura Jurd, a trumpet player and composer from London, is currently a BBC New Generation artist for 2015-2017. Laura Jurd is an active improviser who plays regularly in the UK, and more recently in Europe. She specializes in writing for hand-picked musicians and her own projects. Dinosaur’s band has performed all over Europe, including at Jazz Sur Son 31 in Toulouse, Berlin Jazz Festival and 12 Points in Dublin. As part of Jazzahead, she is looking forward to performing in Bremen this year. European jazz expo. 2015 saw Laura receive the Parliamentary Jazz Award for “Instrumentalist Of The Year” and, in the past, she has been shortlisted to a BASCA British Composer Award. She also received the Dankworth Prize For Jazz Composition and Worshipful company of Musician’s Young Jazz Artist of the Year award. Laura has been requested by BBC Radio 3 and the EFG London Jazz Festival as a composer. Laura’s debut album, “Landing Ground”, was released in 2012. It received praise from national media and music publications. Laura then released her second album, “Human Spirit”, featuring Lauren Kinsella. The Arts Council England supported a 12-date tour that featured this music. Blue-Eyed Hawk, an art-rock/improv group that she is a part of on Edition Records, and the founder of Chaos Collective, a London-based collective of musicians and record labels. Laura is also an avid educator, regularly volunteering with the National Youth Jazz Collective. She has also taught classes and workshops at Trinity Laban Conservatoire of Music and Dance and Leeds College of Music. Visit www.laurajurd.com