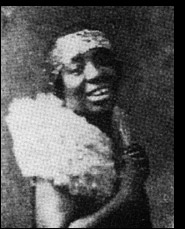 Laura Smith (unknown, February 1932) was an American country and blues singer. Her recordings of “Gonna put you right in jail” and “Don’t You leave me here” are her most well-known songs. Clarence Williams and Perry Bradford were her collaborators. She was the leader of Laura Smith and her Wild Cats. There are few details about her life beyond the music industry. Smith was most likely born in Indianapolis, Indiana. However, her birth date is not known. It is known that Smith visited the T.O.B.A. in the early 1920s. circuit. Okeh started her recording career in 1924, and she ended it three years later when Victor recorded some tracks. Scott Yanow, a music journalist, said that her earliest recordings were her strongest. “By the time she recorded “Don’t You Let Me Here” in 1927 much of her power had gone.” Two songs from her recordings were “The Mississippi Blues” (and “Lonesome Refugee”), which were both about the Great Mississippi Flood of 1929. She was part of the unrelated Smith women (Mamie Bessie Clara, Clara, and Trixie), who all recorded blues songs. Laura Smith recorded thirty-five numbers. According to reports, Smith was living in Baltimore with Slim Jones, a comedian. The most famous number she sang, “Don’t You Leave Me Here”, was recorded ten years later by Jelly Roll Morton. Laura Smith, who suffered from long-term hypertension, died in Los Angeles in February 1932. Document Records has released all of her recordings (see below). She should not be confused with the Canadian folk singer-songwriter of the same name. From Wikipedia