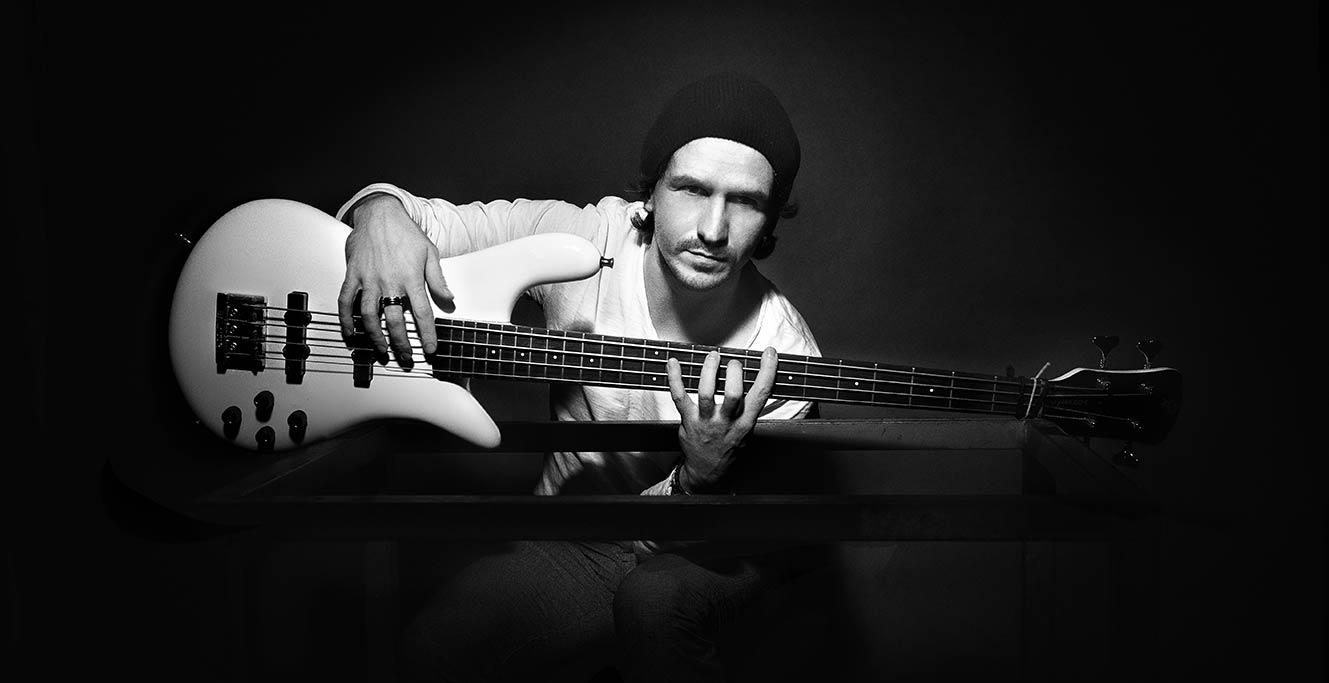 The son of an accordionist, the bassist has deep musical knowledge and understanding. He hails from Moulins- Engilbert, a village in the Bourgogne- Franche- Compte area. He was a firm believer in traditional music and began playing the violin when he was 6. After being introduced to classical music, his horizons expand and he chooses the guitar as his second instrument. This young man, who graduated with a Master’s Degree from the Conservatoire de Dijon has a passion for music. He took Latin at L’Isaac as well as The Big Band arrangement techniques from University. He was determined to move to Paris to take the jazz courses at CIM, and then to study at Didier Lockwood Music Center. At the age of 25, he began playing bass guitar, which became his preferred instrument. He is constantly learning and gaining knowledge that gives him the foundation he needs to be able to adapt to different music styles and still maintain his own sound and technique. After six years of touring, and more than 350 performances in the pop-rock scene, he decided that he would make his own music. His first album, “The Time of Monsters”, was released in 2015. This was at a time when many of the most prominent names of Jazz (Dave Liebman and Emmanuel Bex), as well as French musicians (Raphaele Atlan (Romain Pilon), David Venitucci (Ian Venitucci) were rubbing shoulders. This first album is renowned for its originality and reveals the melodic and harmonic richness of the compositions. Laurent uses a unique language that combines chord play and atypical right hand techniques. This transforms the traditional bars into something that can be expressed with a single instrument. His second album, “Hermit’s dream”, was released by Durance in 2016. Freedom is the order of things and the bass talks on equal terms with Serge Lazarevitch’s guitar, Laurent Dehors’ clarinet, and the voice or bugle Mederic Collignon. Both of these albums received very positive reviews in the digital and specialized print media (Djam JazzNews, JazzNews and la Chronique Litteraire), Soufflebleu and Notes de Jazz, Culturejazz and Jazz Family’s third album, “Black Lion”, which was released in 2018 by Jazz Family. It features Manu Codjia and Pierre de Bethmann, Sylvain Betuf, Pierrick Pedron, Franck Agulhon, and Sylvain Beuf. This album, which features the ‘tenors of French Jazz’, highlights Laurent Bonnots writing skills and reinforces his unique aesthetic. Laurent Bonnot recorded “Oscar’s songs” in December 2019. This quartet featured the great American pianist Marc Copland and Ramon Lopez, the Spanish drummer, and Gueorgui Kornazov, the Bulgarian trombonist. The new album reflects Laurent Bonnot’s unique sound, incorporating his compositional and harmonic researches. Visit www.laurentbonnot.fr