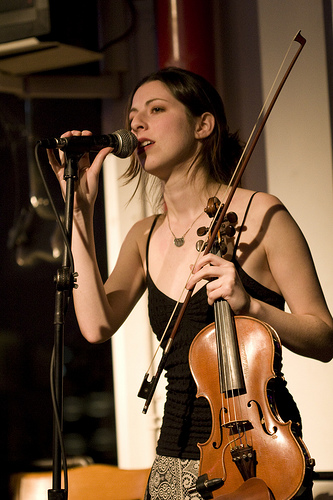 Leah Zeger’s music success story is anything but ordinary. Her professional experience and eclectic musical tastes have spanned every genre. Leah Zeger, a professional violinist and singer, was born and raised in Houston. She has been playing the violin since she was six years old and has won many awards. She made her solo debut at 15 playing the first movement in the Wiieniawski violin concerto with Clear Lake Symphony Orchestra. She also began voice lessons with Katherine Ciesinski, a leading American mezzo-soprano. Zeger was a student at the High School for Performing and Visual Arts. She performed the Bach Double at Carnegie Hall before she graduated. She was awarded a scholarship to the University of Texas at Austin, where she studied violin and opera. Zeger, who was 19 years old at the time, was appointed to the first violin section in the Austin Symphony Orchestra. She became the youngest staff member. Zeger was a soloist in the Austin Symphony with Leila Josefowitz and Yo Yo Ma. She also played with other soloists such as Pinchas Zukerman, Leila Joséfowitz, Yo Yo Ma and Elvis Costello. On Austin City Limits, she has performed with Willie Nelson and Pearl Jam. Her folk band, “The Hudsons”, won the Austin Chronicle Awards 2009 Best Folk Band. From 2006-07, she performed as the lead singer/violinist/dancer with the international world-touring fiddle concert sensation Barrage across Europe, Asia, and North and South America. She was a soloist in 2007 at the Eric Clapton Crossroads Blues Festival, Chicago. She also performed alongside John Mayer, Alison Krauss and Sheryl Crow. She was a member and associate concertmaster of San Bernardino Symphony, and first violinist in the Redlands Symphony. While recording music for Off the Map, Warner Brother’s tv series, Zeger also performed in LA as part of Vitamin String Quartet. Zeger also received a 3-year contract from Celine Dion in Vegas, but she declined it in favor of other touring opportunities. She has been performing with the legendary world-music duo Strunz u0026 Farah, as well as Argentinian-born gypsy-jazz guitarist Gonzalo Bergara (gonzalobergara.com), at international music festivals such as the Montreal Jazz Festival and Buenos Aires Jazz Festival and Panama City Jazz Festival. She has also toured with the Trans-siberian Orchestra and was concertmaster/soloist for Kristen Chenoweth (Wicked, Glee). Zeger’s recent recording credits include collaborations with Michael Jackson’s former musical director, Michael Bearden, Bear McCreary, composer of “Battlestar Galactica” and “The Walking Dead”, Kenny Loggins, and string arrangements/recording for Billy Ray Cyrus’ latest album. Leah joined the Hollywood Bowl Orchestra in 2012, performing with Miley Cyrus, recording and producing her second album “Pour Moi”, producing and staring in her first major music videos “The Man I Love”, as well as touring with Cee Lo Green, a five-time Grammy winner, as his solo violinist. Annie Lennox also featured her as a solo violinist and concertmaster on all of Lennox’s music videos, including the “Nostalgia”, album. Leah performed with Electric Light Orchestra on the 2015 Grammys and was chosen to perform solo with Stevie Wonder in his “Songs in the Key of Life” tour. As solo violinist, she is currently on tour with Hans Zimmer Live 2017. Leah Zeger Quartet regularly performs in Los Angeles. Her album Pour Moi shows her versatility on the violin, her sophisticated vocal technique and multi-cultural musical approach. Yamaha and D’Addario have endorsed her. Visit www.leahzeger.com