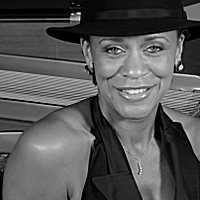 LENORA ZENZALAI HELM is a jazz vocal musician, composer and lyricist. She is a native Chicagoan. Berklee College of Music awarded her a Bachelor of Music degree. She was the first African American woman to receive a B.M. She earned her B.M. in Film Music Scoring/Voice in three years. Helm received her Master of Music in Jazz Performance degree from East Carolina University, Greenville, NC. She was also inducted into Pi Kappa Lambda, a prestigious music honor society and the Golden Key International Honor Society, which recognizes academic excellence. Helm is also the first African American woman to receive the Chamber Music America/Doris Duke New Works award for jazz composers. Helm’s outstanding work as a jazz vocalist earned her the “…voice of her generation …” award from Jazziz Magazine. In October 2011, she released “I Love Myself when I’m Laughing” her sixth solo album. It is the follow-up of 2009’s “Chronicles of a Butterfly, A Story of Transformation”, which was produced by Branford Marsalis, a renowned saxophonist. Helm has been a visiting instructor in the Jazz Studies u0026 Voice Departments of North Carolina Central University’s Music Department in Durham, North Carolina since 2005. She teaches jazz and classical voice, and is also the co-director of their highly acclaimed NCCU Vocal Jazz Ensemble. Helm’s 25-year history of music accomplishments earned her inclusion in Who’s Who in America, Who’s Who in American Women, and Who’s Who in the World. Six solo recordings (five of which are commercially available) include well-known artists like Ron Carter, Stanley Cowell and Mulgrew Miller. She is also a featured guest on recordings by Andrew Hill, Antonio Hart, Donald Brown, and Antonio Hart. Helm gained her performing and traveling stripes while on the road with many R