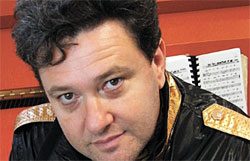 Leonid Ptashka was born in Baky in 1964 as a pianist and composer. At the age 4 he began studying piano. At 14 he began performing on a professional stage. He graduated from the Gnessin Academy of Music, Moscow. His popularity grew in the Russian Jazz scene. Jazz terms deemed his debut album Flight of Fantasy (1984), a huge success. Ptashka is a jazz musician who has taken jazz to the realms of ethnic jazz as well as improvisation on main-stream jazz. He has developed a unique technique and refined his expressiveness over the years by combining electronic, acoustic, and synthesizer keyboard instrument. Ptashka performed solo in recitals all over the globe, including solo recitals at Carnegy Concert Hall New York (1988), Boston University Concert Hall (1998), and Los Angeles Country Museum of Art (1989). Leonid Ptashka continued his concert tours in France and Yugoslavia as well as West Germany, Italy, and West Germany later on. These concert appearances were complemented by musician participation in large jazz contests. Ptashka was awarded 17 national Jazz awards by the time he arrived in Israel (1990). Ptashka, a Soviet jazz pianist, won the second prize at the international Pianist Contest in Kalish (Poland) (1987). He also received the main award from the Pagart Record Company. Ptashka won the Pianist Competition, Los Angeles (1988), and the Jazz Pianist Competition, France (1989). He also received the special prize at Israel’s Eilat Jazz Festival (1991). Leonid Ptashka produced and recorded 7 records in Russia, USA, Israel 1996 (NMC Company), and USA (Mobile Fidelity Company). He immigrated to Israel and immediately became a part of the Israeli Jazz scene performing, teaching, and conducting. He has been a leader and founder of several bands throughout the country. Leonid Ptashka was a founder