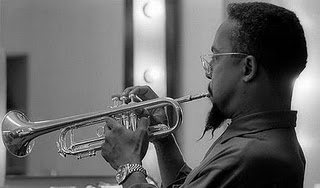 Born Oct. 11, 1941 in Frederick, MD.–died Nov. 9 1999, Brooklyn, N.Y.), Lester Bowie was an American jazz musician. He played trumpet flamboyantly with wide, sweeping gestures and created remarkable timbres from full, rich tones, to human-sounding growls and whimpers to his melodies. His free-wheeling rhythm and innovative sounds allowed him to create musical lines that were both humorous and tragic. Bowie was born into a musical family and studied trumpet in St. Louis. He practiced his trumpet with his eyes out the window in hopes that Louis Armstrong would see it. Other early influences were bebop trumpeters. After serving in the Army, taking music classes at a college level, and accompanying rhythm-and-blues artists, including Fontella Bass, Bowie settled in Chicago (1965-1969), where he began his three-decade-long tenure with the Art Ensemble of Chicago. This quintet was a colourful and free-improvising group that became a favorite of European and Japanese jazz circuits. Bowie’s popularity led him to form a variety of groups, from small combos to the 59-member Sho’Nuff Orchestra in 1979. Lester Bowie’s Brass Fantasy was his most well-known group. This octet played original music as well as jazz arrangements and pop songs. He also performed as a sideman and composed both large-scale and solo songs. He was known for his humor, and often wore a white lab coat, chef’s cap, or suede jacket while performing. However, his deep seriousness and lyricism made him one of the most important jazz trumpeters of his generation. From www.britannica.com