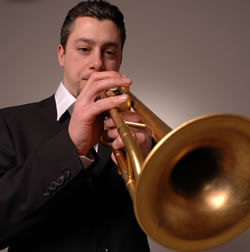 American composer and trumpeter Liam Sillery was first exposed to music by his uncle, a trumpet player. Liam is grateful to have had the opportunity to be surrounded by musicians and teachers throughout his life. Joe Henderson, a great tenor saxophonist, was the most important aspect of his undergraduate studies at University of South Florida. He was a freelance musician before he attended the Manhattan School of Music. He studied at MSM with Cecil Bridgewater and Dave Liebman, Phil Markowitz. Joan Stiles, Mark Soskin and Garry Dial. Liam’s first recording as a leader was Minor Changes (OA2 222020) in 2004. On the Fly (OA2 2230), his second album, was recorded with the David Sills Quartet and released October 17, 2006. He recorded Outskirts (OA2 22505) with Matt Blostein and Jesse Stacken. Vinnie Sperrazza was also on the record. Outskirts was Liam’s first album. It was released January 2009. Downbeat magazine gave Phenomenology (OA2 222061) a 5-star rating on February 16, 2010. Chris Robinson stated in his notes that “Trumpeter Liam Sillery’s Phenomenology feels so natural that one word can be used for it: perfect.” Phenomenology, harkening back to the Blue Note recordings of mid- to late-’60s outside-leaning, gets better with every listen. Details and intricacies are constantly revealed that were not previously known. Music’s rhythms, textures, and sonorities constantly change, but not in an overbearing or contrived manner. Phenomenology’s music is free and easy to listen to. This gives the listener the feeling that the only solution is what is being said. It is a magnificent result. The 2006 performance of the Liam Sillery Quintet in Japan was a huge success. They have performed at Miles’ Cafe in New York City and the Cornelia Street Cafe in New York. The group also performed for a standing-room-only audience at the North Sea Jazz Festival, Rotterdam in July 2011. Priorite (OA2 22082) was the group’s latest cd. It was released by OA2 Records on April 19, 2011. Check out OA2Records.com for more information on this cd as well as the other cds, and what critics think. from http://www.liamsillery.com