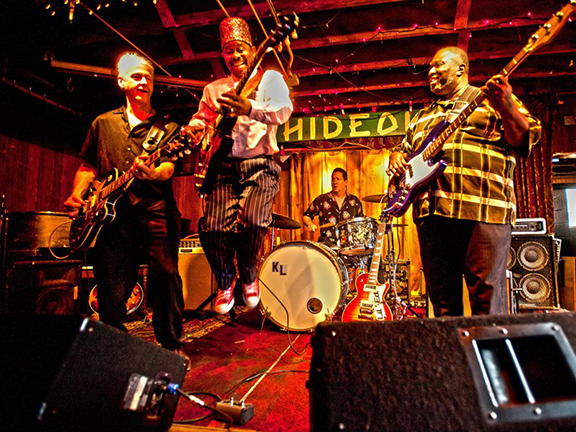 Ed was born in Chicago, Illinois on April 8, 1955. He grew up in Chicago’s West Side. By the age of 12, he was already playing guitar and drums, as well as bass, at the age of 12. Pookie and Ed received support and lessons from their uncle. “J.B. Ed says that J.B. Pookie and Ed spent their teens making music together and formed The Blues Imperials in 1975. Their first gig was at Big Duke’s Blue Flame on West Side. They split the $6 take four times. The group continued to play every neighborhood club over the next few years. They still had to work day jobs to make ends meet. Ed worked ten hour days as a buffer at Red Carpet Car Wash. Pookie drove school buses. They played night after night their roaring blues in small clubs until Bruce Iglauer, Alligator president, heard about them. Iglauer was searching for local talent at the time for The New Bluebloods. This anthology featured some of Chicago’s newest blues musicians. Iglauer recalls that Ed and his band had a great reputation. I had only seen them live once, maybe twice. Although I knew Ed was a hot-slide player, I didn’t know what the band could do. Their music reminded of Hound Dog Taylor’s and J.B. Hutto’s favorite musicians. It seemed like a good idea to have a band that was so rough and ready to record some songs for the anthology. So I invited them down to the studio to do so. I didn’t expect what would happen.” The band, who had never been to a recording studio before, treated the studio like a club and played live to Iglauer, engineer, as well as all those on the other side. Ed quickly recorded the two songs he had rehearsed, but there was still time in the studio so they kept going. Iglauer offered the band an album contract after 10 songs had been recorded. The session produced 30 songs in three hours, with no overdubs or second takes. Twelve of these songs were used to create the debut album of the band, Roughhousin’. It was released in September 1986. The blues world’s latest discovery was met with astonishment by the national press. Spin, Musician and The Los Angeles Times featured the story. The Village Voice declared that “Roughhousin” was the best blues album of the year. Then, in 1987, Mike Garrett joined the band. A year later, Garrett recruited Kelly Littleton, a Detroit friend, to play drums. Garrett’s risk-taking rhythm playing and Littleton’s old-school drumming made a great complement to Lil’ Ed’s and Pookie’s wild, rambunctious play. Their 1989 album Chicken, Gravy