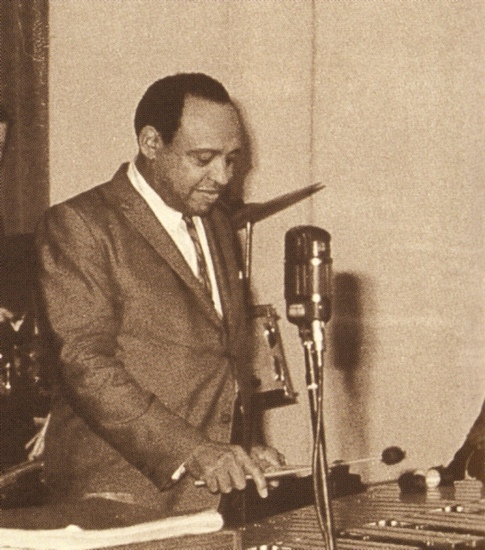 Lionel Hampton started his career on the vibraphone in the 1930’s and continued to be active in the 1990’s. A multi-instrumentalist, Hampton also enjoyed unmatched popularity as a bandleader, showman, and social activist. His greatest contribution as a musician was made on the vibraphone. He became the first great jazz improviser to use the instrument. His big band, which featured some of jazz’s most well-known musicians and singers, was one of the longest-running and most commercially successful jazz institutions. As both a sideman and leader, he recorded extensively in numerous all-star small groups. Hampton was a beloved American musician. He was admired for his extraordinary longevity and outgoing personality. Born April 20, 1970 in Louisville, Kentucky, Lionel Leo “Hamp” Hampton was quickly sent to Chicago by his grandparents. He was sent to Holy Rosary Academy, Wisconsin where he learned drumming in the school’s band. Hampton was a teen when he moved in with his uncle Richard Morgan, a bootlegger who had connections to the show business. Morgan supported his nephew’s ambition to be a musician and bought Lionel’s first drum set, which was modeled on one used by Jimmie Bertrand of the Erskine Hawkins Band. Hampton was first inspired by Bertrand, who was a drummer and a part-time xylophonist. Hampton started playing drums in a newsboy’s group organized by Chicago Defender, a prominent black newspaper. He was a professional musician by the end of 1920, having played in many of the top Midwest “territory band” of his day. In 1929, he recorded his first album with Paul Howard’s Quality Serenaders. He was touring with these bands when he found himself in Los Angeles. There he joined Les Hite’s band which was accompanying Louis Armstrong. Hampton had already learned how to play the vibraphone by 1930. Armstrong saw Hampton practicing and asked Hampton to join him for his next recording session. Hampton’s Memories of You and Shine recording was the first to record jazz improvisations on vibraphone. Hampton began singing and playing the piano, and eventually left Hite’s group to form his own big band. He was leading a band at Los Angeles’ Paradise Club’s famed Central Avenue when Gene Krupa and Teddy Wilson arrived to watch the show. They joined the band stage. Goodman was so impressed with Hampton’s vibraphone sound that he asked Lionel if he could join the recording session scheduled for the following day. The recordings of the Goodman Quartet were a huge success and Hampton was a regular on Goodman’s small group records. He occasionally performed with Goodman’s big-band. RCA Victor also recorded a series classic swing albums while Goodman was still with him. He longed to be a leader again in a big band by the 40’s. Gladys Goodman encouraged him to form his own band in 1941. The R had a big hit with this band in 1942.