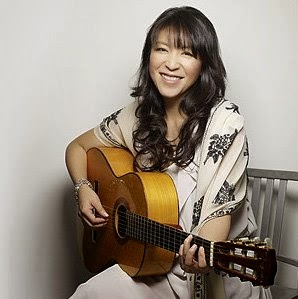 Lisa Ono (Ono Rinsa) is a well-known Japanese-Brazilian bossanova singer. Born in Brazil, she moved to Tokyo with her family at age 10. She spent half of her year in Japan and the other half in Rio de Janeiro Brazil from that point on. Although she only lived briefly in Brazil, her father, Baden Powell de Aquino’s agent, made her into an ambassador for Brazilian popular music in Japan. Lisa moved to Japan with her dad, who opened Saci-Perere (a Brazilian restaurant) where she began performing bossa nova, and samba. Lisa Ono sings and plays the guitar. She is also a songwriter. Catupiry was her first album. Since then she has continued to record, releasing one album per year in Portuguese. After appearing in many TV commercials, she quickly became a household name in Japan. Her album Nana was awarded the Japan’s “Grand Prix Gold Disk Award For Jazz” in 1991. Her third album Menina, which was also recorded in Rio de Janeiro won the same Grand Prix award. She released Dans Mon Ile, a collection of French songs based on a trip to France in 2003. Lisa announced her second child’s birth, a boy on October 7, 2008. Lisa has also performed in Brazil with Tom Jobim, Joao Donato and other performers around the globe. Japan has seen Emilio Santiago, Toninho Horta and Paulo Jobim at Blue Note Tokyo. Lisa has created music for Japanese television commercials and made guest appearances on various recordings. She has 22 albums to her credit as of November 2007. Text contributed by users is available under Creative Commons By–SA License. It may also be available under GNU FDL.