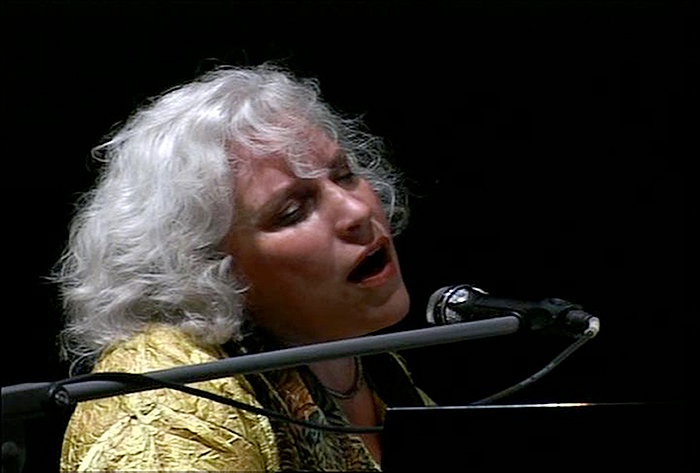 Lisa Sokolov, a New York jazz singer, improviser, and composer is an exemplary example of a New York jazz vocalist. Her music combines the best of both jazz and free music. Angel Rodeo’s recordings, Lazy Afternoon and Presence, as well as A Quiet Thing, have received Best CD Of The Year citations. DownBeat magazine has cited “Presence”, 5 stars “Masterpiece”, Best Album of the Year, and was included in the DownBeat “Best of the Decade” list in 2010. Her studies started as a classical singer and pianist with conservatory preparation education and traditional music training. She became fascinated by John Coltrane’s music and decided to find Jimmy Garrison, Coltrane’s bassist at Bennington College in Vermont. She chose this school to study with Bill Dixon, Jimmy Lyons, Milford Graves drummer, Vivian Fine, and Louis Calabro composers. Lisa started working with William Parker, a bassist, upon her arrival on the New York music scene in 1977. This partnership continues. These years saw the trio work with Jeanne Lee and Ellen Christie. In Studio Henry’s early days, Lisa was often heard with Robin Holcomb and Wayne Horvitz. She has been a part of many jazz and new music legends over the years, including Rashid Ali and Badal Roy, Badal Cyrille and Mark Dresser. Her performances include solos, duets, quartets, big bands, (she has recorded with William Parkers Little Huey Orchestra and in duo for William’s Song Cycle) and her own Voice/Movement/Theater work and choral works. She was heard at The Stimmen Festival and Opera House of Lyons as well as the Montreaux Jazz Festival, The Spoleto Festival, Opera House of Lyons, Opera House of Lyons, The Spoleto Festival, Havana International Jazz Festival and Tampere Jazz Happening. Lisa has recorded with Soul Note, Uneet and Aum as well as Between the Lines, Boxholder and Laughing Horse Records. Sokolov is the inventor of Embodied VoiceWork, a method of vocal improvisation. She teaches this method at The Experimental Theater Wing of New York University, Tisch School of the Arts, where she is also a Full Arts Professor. Sokolov spent ten years on the faculty of The Graduate Program of Music Therapy, NYU before taking up her full-time appointment at Tisch. Ms. Sokolov has been invited to teach workshops, master classes, and perform internationally in her vocal techniques for artists, therapists, doctors, and anyone who wants to connect, sing, and communicate. She has been featured in newspapers, magazines, and texts on improvisation for her performance and vocal techniques. Lisa’s work as a lay-cantor was featured in a CBS Special, “Sacred Art: Ancient Voices”. Lisa is recognized as a pioneer in the field of Music Therapy for her work, trainings, and writings on the wider use of the voice in this culture. She is currently the Director of The Institute for Embodied VoiceWork, New York. There she trains music therapists and physicians post-graduates. She is also a frequent keynote speaker at universities and conferences around the globe. from http://lisasokolov.com