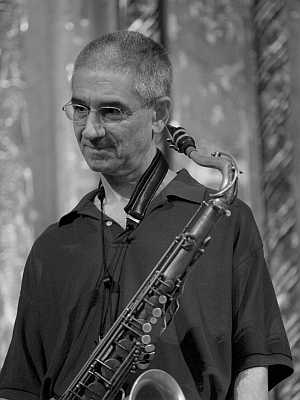 Search under “Flow Trio” for The Flow trio. Louie Belogenis, a self-taught musician, was born in the heyday of the East Village when New York City’s avant-garde was still around. His music is influenced mainly by poetry, film, music and dance. He was also a member for four years of Richard Foreman’s Ontological-Hysteric Theater. John Zorn became his friend and selected Louie’s first instrument from We Buy on Third Avenue. Zorn, along with musicians such as Wayne Horvitz and Phillip Johnston, encouraged him, and he occasionally performed in public. Rashied Ali saw Louie’s playing during a gig with William Hooker’s band and invited him to his studio, which was the former Ali’s Alley club. This fortuitous encounter led to Prima Materia and many tours and recordings in the mid- and later 90’s. Rashied’s relationship continued until the death of the master in 2009. Louie has performed with many musicians, including Sunny Murray, Borah Berman, William Parker and Ikue Mori. He has recorded with many eponymous bands, including Unbroken, Flow Trio and Magical Listening Hour. He is always looking to connect with music through his heart. Blue Buddha: Louie Belogenis, tenor saxophonist, met with John Zorn after a chance improvising session. Zorn suggested that Belogenis record a recording with Douglas, Bill Laswell, and Tyshawn Sorey, for Tzadik’s Spectrum Series. It is a lively record that captures four improvisational heavy-weights at their best. from http://fullyaltered.com