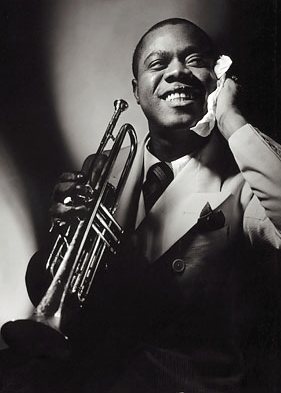 Louis Armstrong (1901-1971), a trumpet player, singer and bandleader, is widely considered one of the most influential jazz artists. Armstrong was raised in New Orleans, which is a multicultural city with unique musical mixes of blues, ragtime and marching bands. While he could play music professionally from an early age, he never traveled far from New Orleans except for 1922 when he moved to Chicago to meet King Oliver, his mentor. Oliver’s band was known for playing primitive jazz, which is a more popular style of ragtime with more improvisation and loose rhythms. Armstrong played mainly backing. He was slow to promote himself and his wife Lil Hardin convinced him to leave Oliver. In 1924, he moved to New York to join Fletcher Henderson Orchestra. There were only a few artists who used the New Orleans rhythmic innovation, but Armstrong was the most popular among New York musicians. He recorded his first recordings in Chicago with Louis Armstrong and his Hot Five in 1925. These were not only huge hits, but also became models for future generations of jazz musicians, whether they be trumpeters or not. Through the twenties, he had more hits, but also troubles like crooked managers and lip injuries, mob entanglements and failed big-band ventures. Although jazz styles evolved, however, music purists still had respect for Armstrong, even though they were occasionally annoyed by his on-stage personality. Armstrong was able to stabilize his business affairs with the support of a great manager in the late 40s. He began to be recognized as an elder statesman in American popular entertainment. He appeared in Hollywood films, toured Asia and Europe, and even displaced The Beatles from their number-one spot with “Hello, Dolly”. Many people today may recognize him as a singer, and he is a great one. However, Miles Davis stated that you can’t play anything on modern trumpet that comes from him. Text contributed by users is available under Creative Commons By–SA License. It may also be available under GNU FDL.