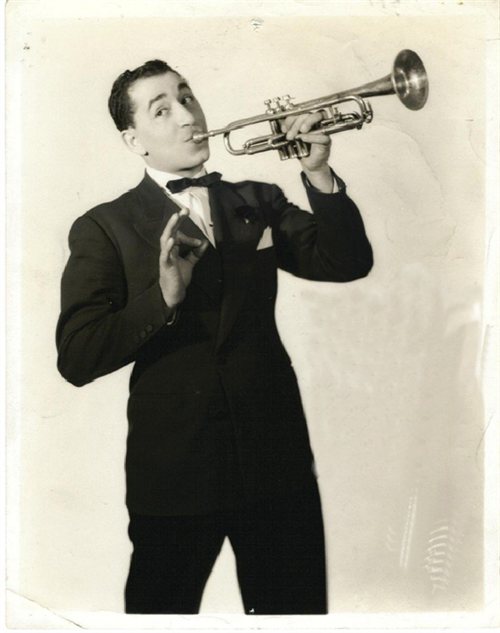 Louis Prima, December 7, 1910 – August 24, 1977) was born to a New Orleans musical family. His family immigrated from Sicily in Italy and settled in the United States after a short stay in Argentina. Prima was a violinist for many years when he was a child. His older brother Leon, a respected local bandleader, was Prima’s. Prima was proud to be from his New Orleans heritage and always made it clear to the audience at every performance that he was an Italian-American. He absorbed many of the same musical influences as Louis Armstrong, a fellow Crescent City musician. His singing and playing revealed that he was influenced by Armstrong’s scat singing and hoarse voice. Prima was a trumpet player in his brother’s band and the Saenger Theatre pit band. He began his recording career in 1933 as part of WGN’s David Rose Orchestra. Also, he was part of The Hotcha Trio with Rose on piano, and Norman Gast on the violin. 1934 saw Prima move to New York. He worked on 52nd Street regularly with his old New Orleans friends, Eddie Miller (tenor and clarinet), George Brunies (trombone) and new acquaintances like PeeWee Russell (clarinet). The informal jazz group that Prima formed was called Louis Prima and His New Orleans Gang. This band recorded for Brunswick from 1935 to 1936 and later for Vocalion as well as Decca. Prima’s 1936 composition “Sing Sing Sing”, which he had recorded with the New Orleans Gang in March 1936 as a Brunswick 78/7628 with “It’s Been So Long” on the B side, was one of his greatest hits. Benny Goodman’s Carnegie Hall performance with Gene Krupa as the featured drummer has been a landmark performance. Louis Prima and his Band Prima made the move to Los Angeles to headline the Famous Door nightclub. He was featured in many Hollywood films, including a performance with Bing Crosby’s 1936 film Rhythm on the Range. Prima and his Dixieland Gang continued playing club dates all across the country, including a stint at New York’s Hickory House in 1939. Prima was a big band back then. He apparently gave in to the pressure of booking agents and formed a big band in 1940. Prima used a distinct, shuffling beat that he called “Gleeby rhythm”; this Prima shuffle was a part of his repertoire for over two decades. Prima was the main vocalist of the band, with Lily Ann Carol being the “girl singer”. Jimmy Vincent, a young energetic teenager, was Prima’s high-powered drummer. He remained with Prima for many years. He added singer Cathy Ricciardi to the band in 1947. She recorded under the name Cathy Allen. In 1949, she was succeeded by Keely Smith, who would become his fourth wife. The band specialized in novelty songs such as “Civilization(Bongo Bongo Bongo Bongo”)” and “All Right, Louis, Drop the Gun”. Prima’s big band continued to the 1950s with a series novelty recordings, sometimes supervised by Mitch Miller. Vegas years: The big-band sound began to lose popularity and Prima started losing money just as Smith was pregnant. Prima was able to find work in small venues across the East Coast with Smith. He eventually called Bill Miller, his friend and entertainment director at The Sahara casino and nightclub in Las Vegas, to ask for a job. Cab Calloway, his friend, warned him not to go into the cramped Sahara lounge. But the financial pressure was too much. Prima called Sam Butera, saxophonist, and asked him to get a few musicians to go to Las Vegas for Prima’s debut. Prima recognized his new musicians and asked Butera the name of the band. Butera responded, “The Witnesses!” Sam Butera and The Witnesses supported Prima and Smith on stage, and on records. Prima and Smith put in a lot of work throughout the 1950s. They performed multiple shows per night, finishing at 6 a.m., which was a great reward. Prima demanded that Smith play a poker-faced, humorless character on stage. This would allow Smith to respond to Prima’s outrageous ad libs. Smith had a great sense of humor that was often heard on the recordings. No matter how incorrigible Prima tried, Smith would always come back with a humorous comment of her own. Louis Prima and Keely were the perfect models for Sonny.