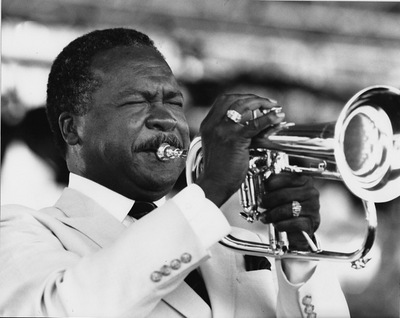 American jazz trumpeter Edward Louis Smith was born May 20, 1931 in Memphis, Tennessee. He played with Dizzy Gillespie and Miles Davis while studying at the University of Michigan. After graduating, he went on to play with Percy Heath and Cannonball Adderley. Blue Note Records was his first album. The first, Here comes Louis Smith, was originally recorded by Transition Records in Boston. It featured Cannonball Adderley, then under Mercury’s contract, playing under the pseudonym Buckshot La Funke, Tommy Flanagan and Duke Jordan. Art Taylor and Doug Watkins were also on the album. Smith’s first music career was short. He became a teacher at Ann Arbor’s University of Michigan, and later recorded for SteepleChase. Smith had a stroke in 2006. He is still able to be seen enjoying live jazz in Detroit/Ann Arbor, but has stopped performing. Booker Little, his cousin, was also a trumpeter. From Wikipedia