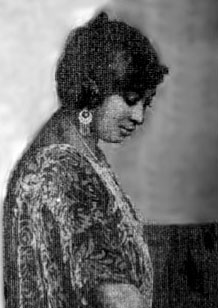 Cora Calhoun is Cora’s real name. Born in Chattanooga (Tennessee), USA on 19 September 1887. She died in Chicago, Illinois, USA on 10 July 1972. American female session musician, pianist, composer, arranger, and bandleader. Austin studied music at a college and university in Nashville, Tennessee. She then moved to Chicago in 1923 to perform. When she was seated at the piano stool, she was the ‘life and soul’ of her vaudeville band. This made a huge impression on Mary Lou Williams, a preteen. Austin’s career grew with Williams’ success on the TOBA* circuit shows. Austin wrote and arranged many songs, sometimes while also performing. She also backed and recorded alongside other female artists like Ma Rainey and Ethel Waters. Austin was also a member of the Blues Serenaders, and sessioned for Paramount in the 1920s. Austin’s “Serenaders” line-ups for recordings featured artists like Kid Ory and Johnny Dodds, Tommy Ladnier (Jimmie Noone), Natty Dominique, and Tommy Ladnier (Timmie Noone). Later on in her career, Austin was the musical director at Chicago’s jazz hotspot, The Monogram Theater at 353 South State Street. After twenty years, she was there and became pianist at Penthouse Studios, Jimmy Payne’s Dancing School. *TOBA stands for “Theater Owners’ Booking Association”. Discogs