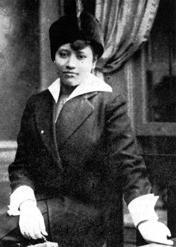 Lucille Hegamin, a classic blues singer of the 1920’s was recorded in the 1960’s. At age 15, she sang in a local church choir before going on tour with the Leonard Harper Revue. From 1914 to 23, she was married to Bill Hegamin, a pianist. After performing for a long time in Seattle, Hegamin was one of the first blues performers to record. Hegamin recorded “Jazz Me Blues”, and “Everybody’s Blues”, in Nov. 1920 shortly after moving to New York. Her Blue Flame Syncopators toured her, and she later led the Dixie Daisies. Hegamin was a performer at clubs and also appeared in Broadway shows in 1920. Later in the decade, she worked with Doc Hyder’s Southernaires and performed at Atlantic City from 1933-1934. She then quit music to become a nurse in 1938. She made a comeback in the 1960’s, appearing at several charity events before she retired from music. Lucille Hegamin made 68 recordings between 1920 and 26. Two songs from 1932 were included on a 1961 Bluesville LP, which resulted in four titles. She also recorded three more cuts on a 1962 Spivey record. Allmusic