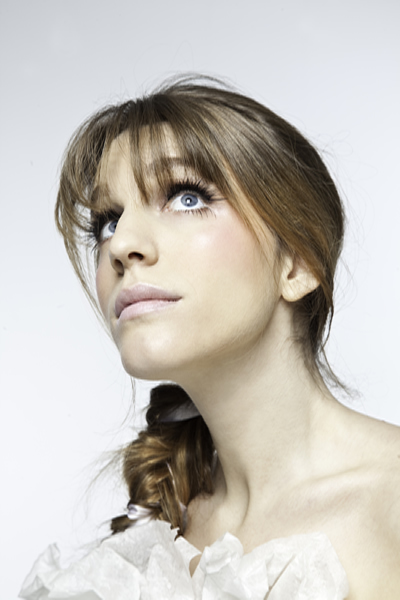 LUISA SOBRAL Luisa Sobral. Voice, guitar, paper, pen, and more. Each composition is a musical creation. 23 years of free choices. Instinctive and expectant. “The Cherry on my Cake” represents all of those possibilities. Songs that are full of images. Videos created to match the song’s rhythm. This is her first album of full length under her own name. It’s the result of a musical journey that began at age 12. The guitar was the first instrument that gave her empathy for musical instruments. She discovered the chords in her parents’ music by playing the guitar. From The Beatles, and many other artists. She was a young girl when she discovered the amazing melodies of jazz. A melody’s ability to stand alone without any instruments. Billie Holiday and Ella Fitzerald were among her influences. She was inspired by Chet Baker and Chet Baker and set out to study music at the Berklee College of Music in Boston, USA. She was nominated at the Malibu Music Awards (2008) for “Best Jazz Song”, “Best Jazz Artist” at Hollywood Music Awards (2008), “International Songwriting Competition 2007” (2007) and “The John Lennon Songwriting Competition 2008”. Luisa’s success was not only due to her being nominated, but also because she was completing her studies. After completing her Boston degree in 2009, Luisa’s musical identity continued to grow in New York. She had many ideas that would become songs in her bag, and some of them were already there in her head. Her mother and her mother both shared their dreams that her first album would be called “The Cherry on My Cake”. It was her maternal magic that made this dream come true. Learning the jazz standards, practicing Brazilian music in bars and her creativity all resulted in songs that could be recorded or printed. Each one after the other. Beautiful melodies that contain images. “I Would Love To”, Don’t Let Me Down”, and “Why Should I” are just a few of the songs that were included in “My Funny Clementine”. It was clear that the focus on the beginning theme was obvious. It’s a triple time rhythm that sounds like a jazz waltz. It is colorful and has a powerful chorus. There are also violins in heaven. The English language was not the only option for record composition. Luisa was on her way to Portugal and performed at Stock’s Super Bock Super Rock Festival in 2009. She mentions at this gig that she would love to sing a song in Portuguese. Luisa creates a poem and melody to accompany her back to the States. Then, “Xico and Dolores” follow. The will to cover a Portuguese song on the forthcoming record was very strong. Rui Veloso would be the perfect person to fill this role, an artist Luisa’s dad listens to often. Luisa records Carlos Te’s lyric, and tries a new version of “Saiu para a Rua”. from http://www.wrasserecords.com