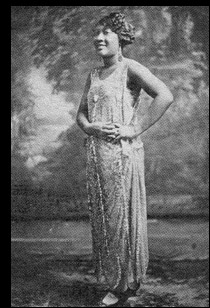 Maggie Jones, also known as “The Texas Nightingale”, was born Fae Barnes in Texas about 1900. In 1922, she arrived in New York and joined the TOBA’s black vaudeville circuit. She was already singing in the Hall Johnson Choir and in Clarence Muse’s company by 1926. Maggie Jones was part the touring company for the 1928 show Blackbirds, in which she performed with Bill Robinson. She returned to Texas in the end and performed in her own revue in Fort Worth. She is also well-known for owning a clothing shop. She was never heard from again after 1934. Maggie Jones was first heard on one of the Black Swan’s last records, July 1923. Although she also appeared on Pathe, Paramount and a few other labels, the majority of her 38 titles were issued by Columbia’s 14000-D “race series”. Jones was an excellent blues singer and was often accompanied by many interesting musicians, including Fletcher Henderson and Charlie Green. Maggie Jones recorded her last record in October 1926.