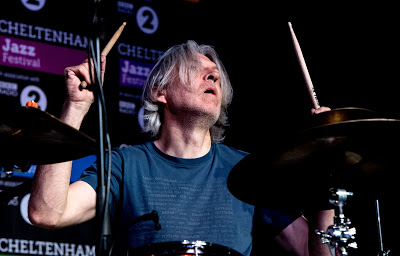 Magnus Ostrom was the second child of local artist Arne Ostrom and Siv Ostrom. He was born in Skultuna on May 3, 1965. Three years younger, his brother Tommy was also born. Magnus was influenced by Tommy’s eclectic record collection, which included Deep Purple, Almond Brothers, Jimmy Hendrix and Lynyrd Skynyrd. Magnus, then eight years old, built his first drumkit from his father’s paintcans. A year later, he formed his first band with Esbjorn Svensson, a street kid. Magnus was given his first drumkit as a Christmas present, complete with snare, bassdrum and hi-hat. He gave his first concert one year later. The band was known as “Beware Of The Beginners”. His brother took him to see Billy Cobham and John McLaughlin in 1978. His musical world was turned upside down by this experience and he discovered jazzrock. Magnus, 13-16 years old, was in several bands with Esbjorn and played a variety of styles from punk to dance-music. Magnus attended the music highschool (Gymnasium), in Vasteras from 1981 to 1983. Magnus and Esbjorn formed their first trio during those years. He studied music at Sjoviks folk school from 1983 to 1985. Magnus moved to Stockholm in 1985 to study at The Royal Conservatory of Music. Magnus immediately began to play in various bands on the Stockholm jazz scene. He was a regular member of Monica Borrfors’ band from 1987 to 1992. Monica Borrfors is a well-known Swedish jazz vocalist. They toured extensively in Sweden and abroad together. He says that playing live with a singer is the best way to learn as a drummer. After a short break Magnus and Esbjorn reunited and began jamming again in 1989. They created a band called Stock Street B. They used samplers and octapads to record sampled vocals. It was too soon for this kind of thing. We were not understood by anyone. They thought we were listening to backing tracks, but we were actually doing it live …!”. Esbjorn and him started the predecessor to e.s.t. in 1991. In 1993, Dan Berglund joined the band as a bass player. They recorded 12 albums together and one concert DVD. They toured the globe several times and sold hundreds of thousands of records. Today, e.s.t. e.s.t. are widely considered to be the most influential jazz band of the Noughties. Their album “Live In Hamburg” was awarded the “Album of the Decade Award” by the London Times. Magnus was a musician who played with many Swedish artists and bands, including Bobo Stenson and Lenart Aberg, Palle Danisson, Svante Thuesson and Nils Landgren. Their album “Live in Hamburg” has been awarded “Album of the Decade” by no less than the London Times. Magnus names the following drummers his favorite: Mick Tucker and Mitch Mitchell, Billy Cobham and Roy Haynes, Tony Williams and Elvin Jones.