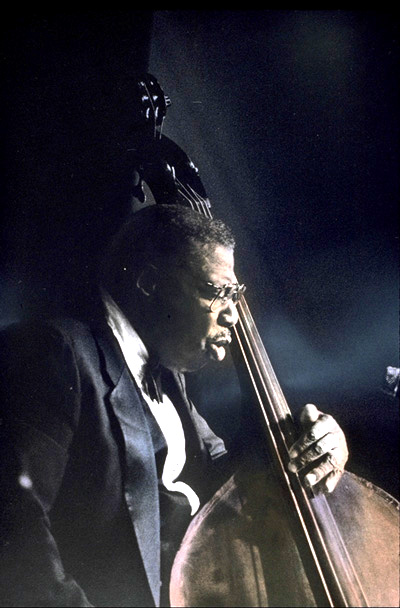 Major Holley was best known for using the Slam Stewart trademark of singing along with his bowed bass solos, although he sang in unison while Stewart vocalized an octave above his bass. Otherwise, Major Holley (known as “Mule”) was a fine supportive bassist. He originally played violin and tuba, but switched to bass while playing in Navy bands. He played with Dexter Gordon, Charlie Parker, and Ella Fitzgerald in the mid- to late ’40s, and in 1950 did a series of duet recordings (never reissued) with Oscar Peterson. After a period working for the BBC in England, he toured with Woody Herman (1958), played with the Al Cohn-Zoot Sims quintet (1959-1960), and worked in the studios, in addition to appearing on some jazz recordings and having a stint with Duke Ellington (1964). Major Holley taught at Berklee (1967-1970), freelanced in New York, and recorded with everyone from Roy Eldridge and the Lee Konitz Nonet, to Quincy Jones; he even met up on two records with Slam Stewart. from allmusic