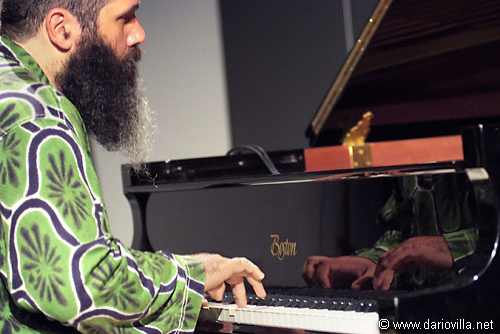 15 years ago, everyone knew Malcolm Braff. Legendary musicians were all around him: 24 hour music in an old Corinthian Temple in the middle Vevey; a concert with a keyboard suspended from a hot air balloon… and of course, his hair, the aura, of a Bengali hermit, that couldn’t go unnoticed. Malcolm Braff was immediately recognisable. While he wasn’t sure what he wanted to do, he would play standards, La Javanaise. He’d pick the white keys and the black keys from the mild piano. But there was an imperious style and a playful authority in Braff’s posture. You could see a hint of Don Pullen or Abdullah Ibrahim’s Africa, Zulu gospel. Most importantly, Malcolm has wanted to collaborate with anyone, no matter how small or large, since the beginning. . His father, a missionary from Rio de Janeiro, was Malcolm’s father when he was born in 1970. He lived in the streets, Rio, Cape Verde and Dakar. Despite the best efforts of his entourage to secure the doors in Senegal’s house, the drums escaped through every crack and crevice. Malcolm Braff’s musical images have always been in opposition to his childhood. They are a mixture of rigorous sensuality and a roughness that he has cultivated with his sharp, cutting edge fingers. Malcolm’s violent love for jazz is his guiding light. He longs for unrestricted liberties. For nights spent looking for the right notes in each note, and then spending weeks crafting a multi-faceted tribute to Ligeti for a chamber ensemble. He gracefully dives into the volcanics of African music alongside his brother, Yaya Ouattara, the djembe and before resting in Calcutta’s classical Indian hammams with Erik Truffaz. The sweet aroma of calm is always followed by the need for devastation in improvised music. Arnaud Robert, http://www.malcolmbraff.net