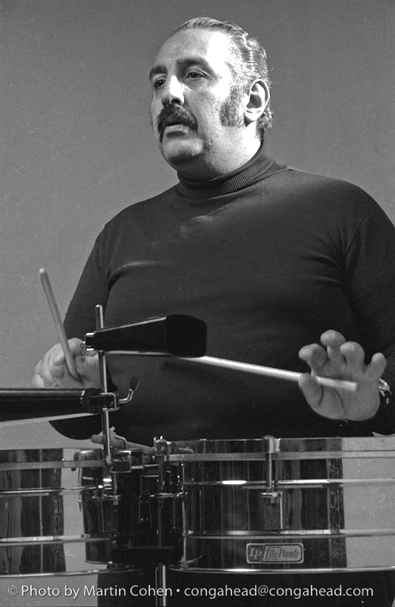 Manny Oquendo, born January 1, 1931 and died March 25, 2009. He was an American percussionist with Puerto Rican heritage. His main instruments were the bongos and the timbales. He was a long-standing member of Eddie Palmieri’s Conjunto La Perfecta. He left the group in the 1970s to lead the Conjunto Libre. Oquendo was born in New York City, and began studying percussion in 455. He was a member of the Latin and Tropical music bands Luis del Campo and Juan “El Boy Torres, Luis del Campo and Jose Curbelo. He was the bongo player for Tito Puente in 1950. He played in the 1954 Tito Rodriguez bongo game and in 1955 with Vicentico Valdes. After working as a freelancer in New York, he joined Eddie Palmieri’s Conjunto La Perfecta 1962. He helped to develop the New York-style Mozambique rhythm. Conjunto Libre, later known as simply Libre, was his band. He had a worldwide hit in 1983 with “Little Sunflower”. This Freddie Hubbard composition is included in their album Ritmo, Sonido y Estilo. Oquendo’s solo timbales were known for their simple tipico phrasing and resemblance to the Cuban timbaleros from the 1940s. Juan de Marcos Gonzalez (musician and producer) claims that Oquendo’s timbales tuning was similar to Silvano “Chori” Shueg. Oquendo’s solos also included the rhythmic language from the folkloric quinto (the lead drum of rumba), From Wikipedia