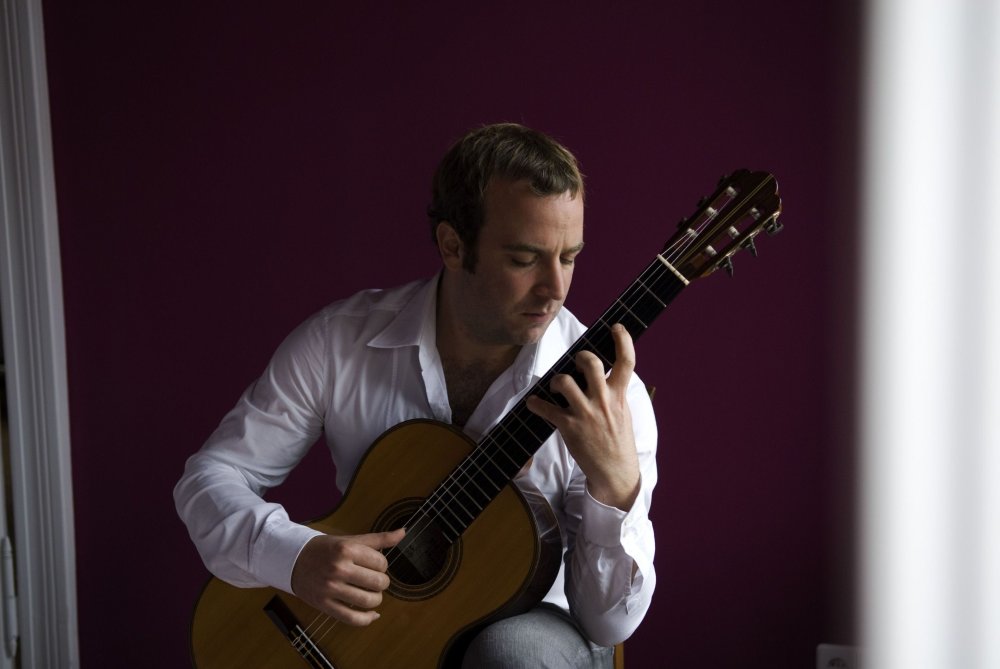 Marc Sinan is the son of a Turkish-Armenian father and a German mother. He has more than 15 years experience on the international concert scene. Marc Sinan is a well-respected soloist with the Royal Philharmonic Orchestra, Georgian Chamber Orchestra, and other renowned musicians. He has performed in North and South America, as well as on European concert tours. He was the Augsburg School of Music assistant, where he taught one of the most popular guitar classes in Europe up to 2003. Marc Sinan has been featured on numerous television and radio recordings, including those for the Austrian and Bavarian public broadcasters as well as the Turkish TRT. He has also recorded several CDs. 1994 saw the release of “A Royal Christmas – Marc Sinan and Royal Philharmonic Orchestra”, a highly-acclaimed recording. Jorg Widmann, the composer, dedicated to Sinan the commissioned work EntSchwebung for guitar/electronics in 1998. Sinan recorded the piece with Robert Beaser’s and Toru Takemitsu’s support. Marc Sinan’s benefit concert tour, “Sounds are Friends”, in January 2000, which traveled to 15 German cities, provided music lessons throughout 2007 for more than 70 children in Golcuk (Turkey near Istanbul) who had lost their families in 1999 earthquakes. Sinan has worked with many musicians since his 2002 tour from Istanbul to Buenos Aires with Burhan Ocal, the percussionist. Sinan performed solo with Big Band backing for his Livin’Swing project, which was born from his collaboration with Marc Schmolling, the pianist and arranger. His CD FASIL was released under the ECM label in February 2009. It received international acclaim. Marc Sinan asked Julia Hulsmann, a Berliner composer, to set Marc Schiffer’s text to music. Twelve songs tell the story of Aisha (the Prophet Mohammed’s most beloved wife). His Hasretim-A Trip to Anatolia project was launched in October 2010. Hellerau – European Center for the Arts Dresden and the Dresdner Sinfoniker commissioned Marc Sinan to collaborate with Markus Rindt (the artistic director of the Dresdner Sinfoniker) to compile a series audio and video recordings of folk musicians on their Turkish journey of discovery from the shores the Black Sea to the Armenian frontier. Marc Sinan worked closely with Andrea Molino, the conductor and composer. He then transformed this material into an installation that featured 20 musicians and video projection. He was awarded the Special Prize by the German Commission for UNESCO for his work on “Hasretim – Trip to Anatolia”. His “inspiring, experimental discourse between cultures” project received an award. “Hasretim”, a CD/DVD featuring Jonathan Stockhammer’s Dresdner Sinfoniker, will be released under the ECM label in spring 2012. In November 2011, the chamber music study “Oksus” was first performed in Berlin. Marc Sinan is currently working to create “Dede Korkut”, a musical theatre for orchestra, contemporary dance and video. “Dede Korkut”, which is a continuation of his close collaborations with the Dresdner Sinfoniker Markus Rindt, Hellerau and Hellerau, will be celebrated its debut in autumn 2013, under the patronage by the Turkish Culture and Tourism Minister Ertugrul gunay. from http://www.marcsinan.com/