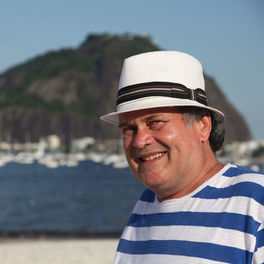 Marcos Ariel is a pioneer of Brazilian music in the 1990’s. He is a flutist, pianist, composer and flutist who is a true “Carioca”, a Rio de Janeiro native. His musical style is infused with passion for Jazz and Classical music. He is a skilled player, with a speed and precision that transcends genuine warmth. At home, in Rio de Janeiro, music flourished. His father encouraged him listen to and absorb the greats, such as Bach, Beethoven and Mozart. Later, he developed a deep admiration for his fellow countryman, Hermeto Pascoal, and American contemporary Jazzman Chick corea, who both had influenced him. He began playing piano at the age of seven and was soon studying flute at the School of Music of the Brazilian Symphonic Orchestra by the time he was 21. He was also an actor in the Guanabara Youth Theatre, but eventually returned back to music performance with a group that included musicians and singers who play a Brazilian style of music called “Choro”. He was also an assistant to Brazilian legends Master Cartola and Roberto Gnatalli. Marcos Ariel’s first album, “Bambu”, was recorded in 1980 by Globo Records in Brazil. It was also released in France and England by Wathmusic, Farout records, and in Brazil by Master Cartola. He released the Grammy-winning Terra do Indio in Brazil and the USA after the success of Bambu. Jazziz Magazine named Terra do Indio one of the top Jazz albums. With the release of his instrumental LP Brazilian Piano, he was awarded the Brahma Extra music Award. WAVE HUNTER is his latest album of 2019, featuring Marcos Ariel (composer/pianist) and Eneas Marques (guitarist/producer). Ariel’s 32nd album blends soul and classic jazz, and is a musical tribute to the ocean. It was the result of three musicians sharing a passion for California’s waves and Rio de Janeiro. From www.marcosariel.com