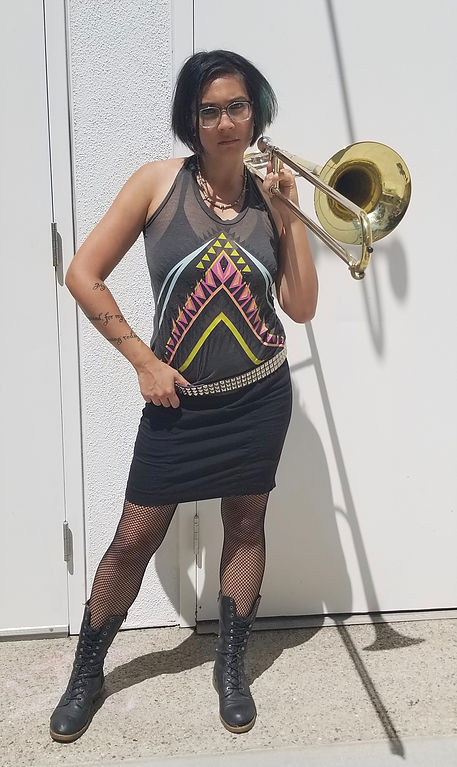 Mariel was born in California’s bay area in 1988. This is where she found her family, which included musicians, artists and organic marijuana growers. Mariel was captivated by music from a young age. The Austin family was buzzing with guests as they sipped beer and watched their children play in the backyard, while the Cranberries played on the stereo in their living room. Mariel, three years old, decided to steal a wooden knife from her kitchen. Mariel ran into the living area and used the spoon to play an electric guitar before a group of puzzled adults, including her parents. After grabbing the attention of her audience, she began to strike her spoon like a rock star and sang along to “Zombie”, a song by the Cranberries. Dad quickly got up and took a family camcorder to capture this spontaneous musical outburst. This home movie is still in circulation to this day. Four years later …..Mariel’s parents noticed her passion for music and signed her up to voice lessons through San Francisco Girls Chorus (SFGC). This program was already in place for her older sisters. She was already learning Gregorian chants, Chinese poetry, Balkan folk songs, and Broadway show tunes. She discovered that she was able to pitch in absolute pitch, also known as perfect pitch, during her training. This encouraged her family, friends, and teachers to continue her pursuit of music. Mariel took up flute, clarinet, piano and alto sax throughout elementary school, with a newfound passion. But there was a small blockade. However, her interest and ability to use these instruments was short-lived. They didn’t seem to be for her. She could pick up songs by ear, but when she returned home, she was again left behind with her homework and written exercises. Mariel was 6 years old when her parents took her to see the Berkeley High School Jazz Ensemble. Mariel, 12, had set herself a goal to be in the Berkeley High Jazz Ensemble as soon as she graduated high school. She didn’t know this concert would become a spring awakening. Mariel was taken by her parents to Berkeley High School Jazz Ensemble at Berkeley Marina on Sunday, April 2. Halfway through the concert, the band performed Charles Mingus’ “Fables of Faubus” The famous opening line was played, with the bass trombone and baritone sax. This is because the latter was particularly zealous. Mariel was alerted by the brazen sound and awakened by it. She decided she wanted to become a trombone player. Mariel began trombone lessons the year after she turned 13 years old. Mariel had braces, but she continued to practice her exercises diligently and was never denied a solo in the middle school band. After her braces were removed, she started writing pieces for the Berkeley High School jazz ensemble, which she graduated in 2007. After that, she continued her studies at California State University Northridge in Jazz Performance, where she wrote for the school’s Jazz “A”, Band, and received her Bachelor’s degree in 2011. Mariel began receiving offers to arrange and transcribe music for different genres and settings shortly after she graduated. Contractors began to ask Mariel to perform on television shows like American Idol, The Voice and NBC’s Hollywood Game Night. She realized that she wanted to continue her education and study jazz composition. She began the tedious process of applying online for grad school. Mariel was admitted to New England Conservatory’s Jazz Composition department in 2013. She said goodbye to Los Angeles, its brightly lit beaches, tranquil beaches, and avocados and flew to Boston to start her Master’s degree. Here her big band compositions started to flourish. She applied to the New York Youth Symphony towards the end of her studies and was chosen to compose a commission piece. It was to be performed at Dizzy’s Club Coca-Cola at Jazz at Lincoln Center in the next year. Mariel received a master’s degree in jazz composition from New England Conservatory in 2015. Shortly after, Mariel recorded “Runner in the Rain,” her first extended play. It featured four of her big-band compositions and one arrangement. She decided that she wanted to return to Los Angeles to continue her musical career. In late 2016, she flew to California to take the recordings and masters of “Runner in the Rain” back with her. Soon after she returned, she was invited by EstrellaTV to perform with Kat Graham’s live band and EstrellaTV’s Noches Con Platanito. During this time she cultivated “Runner in the Rain” and prepared it for marketing. Mariel was awarded the Phoebe Jacobs Award by the ASCAP Foundation in 2018. Her debut title track, “Runner in the Rain”, was the one that won her the award. The album was released on August 2018 and can be purchased at CDBaby.com. It is also available on Amazon.com, iTunes and Amazon.com. Mariel lives in Los Angeles and continues to play for Noches Con Platanito as well as NBC’s Hollywood Game Night. She is now producing merchandise to promote “Runner in the Rain”. Visit www.marielaustin.com