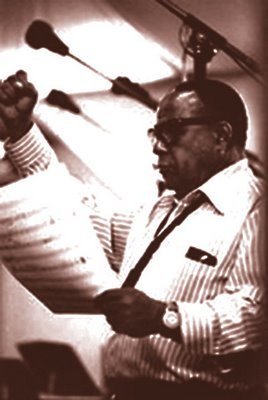 Mario Bauza, a trumpeter of extraordinary talent, is considered to be the founder father of Latin Jazz. He was a trained musician and had a deep appreciation for Cuban traditional music. This allowed him to play an important role in the introduction of Afro-Cuban music into jazz in the 1940s. Cuban Roots. Mario Bauza was born in Havana, Cuba. He showed signs of a unique talent. As a child, he began music lessons at the Municipal Academy of Cuba. He was able to play the clarinet and the oboe in the Havana Philharmonic Orchestra by age nine. He had the opportunity to learn from some of Cuba’s most renowned musicians, such as Antonio Maria Romeu or Lazaro Herrera. He moved to New York at the age of 19 and focused his attention on the trumpet New York. New York in 1930s was booming with big band swing music. Bauza was able to adapt quickly to the style and joined Chick Webb’s famed band in 1933. Webb encouraged Bauza to reach his full potential. Bauza was a member of the group for five years and served as its music director. Webb hired Ella Fitzgerald when he was just 17. Bauza made friends with Dizzy Gillespie during his time at Webb. Bauza later joined Cab Calloway’s orchestra and was responsible for Dizzy’s inclusion in the group. This launched the career of one the most important jazz musicians. Afro-Cuban music was fused with jazz thanks to Dizzy’s friendship with Bauza. Bauza introduced Dizzy, almost a decade later to the volatile and gregarious Cuban percussionist Chano Pizo. Pozo and Dizzy co-wrote “Tin Tin Deo” and “Manteca”, two of the most well-known examples of Latin and bebop music blending. Integration Styles: Bauza’s brother-in law, Frank Grillo (better known as Machito), was also a prominent figure in New York’s music scene. His own big band, the Afro-Cubans, he led and sang in. Bauza joined Machito’s band in 1941 after he left Cab Calloway. Bauza was the music director of the band and also played trumpet for 35 years. Afro-Cubans played music that was both rooted in Latin rhythms but also included jazz harmonies as well as improvisation. This style quickly became popular and was embraced by many as dance music. Machito and Bauza’s arrangements were the basis of Latin jazz. A Legacy: Bauza quit the band in 1976 but continued to perform and compose Latin jazz music for the rest his life. Bauza was a mentor to many younger musicians including Bobby Sanabria and Conrad Herwig. Each of them went on to create and spread the music Bauza created. His death in 1993 meant that Latin music was already a part of the jazz scene. Suggested Reading: Introduction to Latin Music Music of Cuba Elsewhere On the Web. Mario Bauza’s Music Related Articles. *Machito Biography- Profile of Latin Jazz Bandleader Machito. *Eddie Palmieri Bioography- Profile of Latin Jazz Pianist Eddie Palmieri. *Goldfish – Perceptions of Pacha. Sign up for my newsletter My BlogMy Forum… Text contributed by users is available under Creative Commons By-SA License. It may also be available under GNU FDL.