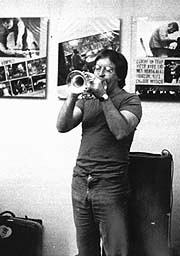 Mark Charig is a major trumpet player on the British and European jazz scenes over the past three decades. His main claim to fame in Canterbury terms is his brief stint in the legendary Soft Machine augmented line-up in late 1969 and subsequent appearances on their landmark album, Fourth». This association was made possible by his participation in Keith Tippett’s late 60s sextet. It is here that Charig achieved his greatest musical accomplishments, along with Tippett, Elton Dean, and Nick Evans. Charig began his musical career as a blues musician. He was on the 1966 Stevie Wonder tour, which was one of his first big gigs. He met Keith Tippett at the 1968 Barry Summer School, along with fellow students Nick Evans and Elton Dean. They formed the Keith Tippett Sextet’s core and would reunite in many Tippett-Dean ensembles and groups over the years. They performed regularly with different rhythm sections until 1970 when the group was absorbed into Centipede. Two acclaimed albums were recorded – You are Here… The group, which included various rhythm sections, gigged regularly until 1970, when it was absorbed into the Centipede. They recorded two acclaimed albums – You Are Here…u003e and Dedicated to You, But You Weren’t Listening». Both were released in 1970. The sextet was resurrected on rare occasions such as a gig at 100 Club in December 1976 (with rhythm section Harry Miller, Louis Moholo, and the rhythm section Harry Miller). However, Evans, Tippett and Charig all participated in the expanded Just Us which became Keith Tippett’s Ark and Elton Dean’s Ninesense. The brilliant brass section of Charig, Evans, and Dean was also part of the Soft Machine experimental septet, which only existed for a few weeks between October 1969 and December 1969. Elton Dean was the only member of the group that remained, while Charig appeared on the Fourth» record. Charig was an integral part of Chris McGregor’s Brotherhood Of Breath, where he played from 1970 to 1977. He also played in the London jazz composers’ orchestra since its inception. His work base was now in the Continent, specifically Germany. He collaborated with Fred Van Hove on MLA (with Radu and Paul Rutherford), ML DD 4, (with Gunter Sommer, Phil Wachsmann) and Alexander von Schlippenbach in the Globe Unity Orchestra. He also participated in Didier Levallet’s Scoop group, French bass player. from http://calyx.perso.neuf.fr