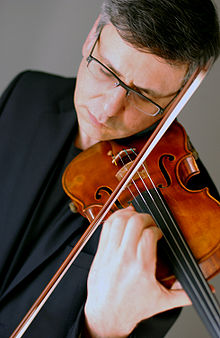 Mark Feldman, a jazz violinist, was born in Chicago, Illinois, United States. Feldman lived in Chicago from 1973-1980, and Nashville, Tennessee, from 1980-1986. From 1986, he worked in New York City as well as Western Europe. Feldman is often a collaborator with Sylvie Courvoisier and John Abercrombie, Dave Douglas and Uri Caine. He has recorded with Joe Lovano and Michael Brecker. He performed in Duo at New York’s Lincoln Center with pianists Muhal Richard Abrams and Paul Bley. Feldman’s 2006 recording, “What Exit”, was released by ECM. Also, his 2006 recording with Sylvie Courtvoisier, “Malphas Book of Angels Vol.3” was released by Tzadik. Tzadik Records released his 1995 album “Music for Violin Alone”, which included his compositions. Enja Records released his string quartet compositions on “Book of Tells” in 2000. He was also a member of Chicago’s Civic Orchestra and played in numerous bar bands. As a Nashville studio musician, he was also a member the Nashville Symphony and toured with the country western entertainers Ray Price and Loretta Lynn. He was part of over 200 recordings. As a soloist in contemporary and modern jazz, he has recorded over 100 recordings in New York City. He was soloist in Guss Janssen’s Violin Concerto with the Netherlands Radio Philharmonic Orchestra and with WDR Jazz Orchestra Concerto for Violin and Jazz Orchestra of Bill Dobbins in 2003. Youtube has live video clips with the John Abercrombie Quartet and Bar Kokhba Seextet, as well as the Masada string trio. Feldman is married Sylvie Courvoisier, a Swiss pianist. Text contributed by users is available under Creative Commons By–SA License. It may also be available under GNU FDL.