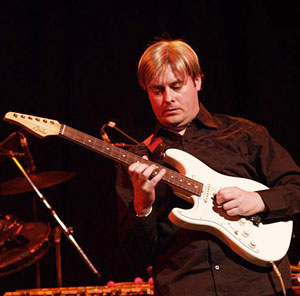 Mark O’Leary was a Cork City native. He learned to play the guitar and then moved to Los Angeles to attend Musicians Institute. He has performed his music in 29 countries, and at many of the top Jazz festivals and modern Jazz venues around the world. As a member Canadian Pianist Paul Bley’s trio, he has toured Europe with Jack DeJohnette. He also performed with Han Bennink in a jazz trio with Bill Bruford. He is the only person to have played in a duo with Paul Bley and Bobo Stenson, Kenny Werner, and Matthew Shipp. He also played in a trio alongside ex Weather Report/Jaco Pastorius drummer Peter Erskine, and Palle Danielsson. He also worked with Alex Cline, Hans Kristian Kjos Sorensen, Terje Isungset, and z’ev as percussionists. Slava Ganelin, Alexander Tarasov (of the Ganelin trio fame), has collaborated with him in various projects. He also played in a UK-based band with Joe Williamson of Trapist and Mark Sanders. He has performed with Dylan Van Der Schyff, Eyvind Kang, and Wayne Horvitz in Zemlya. He performed as a trio with Aldo Romano and Henri Texier in conjunction with Alliance Francaise. He was also a member of a trio that included Jon Christensen, Terje Gewelt, and drummer Tomasz Zukalski. He has also performed in Poland with Bartlomiej Oles and Marcin Oles. He also performed with Stephane Galland and Michel Hadzigeorgiu’s Aka Moon rhythm section. He has collaborated in trio with Peter Friis Nielsen and Stefan Pasborg, as well as with Jacob Anderskov and Kresten Osgood. Born: October 20, 1969 from http://www.markoleary.eu