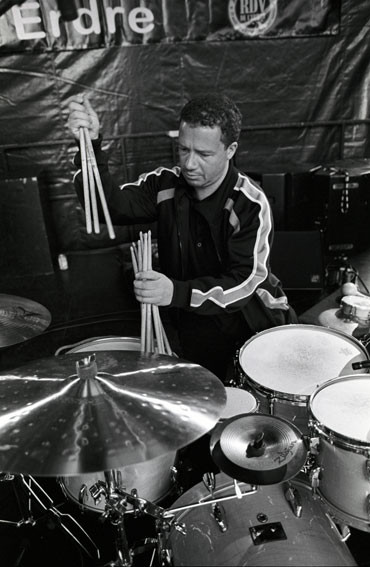 Mark Sanders, a percussionist who has been active on England’s jazz scene since the mid-’90s is a legend. “Jazz” encompasses everything from free improv to Jah Wobble’s dub excursions. Sanders, a true sideman, is gifted with an exceptional technique and acute listening skills. These qualities, along with a lot of enthusiasm, make Sanders the preferred drummer for many artists. Sanders’ impressive discography has seen him on more than 50 titles, but he has yet to release his first album. Around 1995, Sanders started to make a name for himself in the London music scene. His talents were first tested by Evan Parker, Simon H. Fell and Georg Graewe. The drummer has been a part of many of his projects, including a trio featuring John Edwards as bassist (documented in The Two Seasons 2000). Veryan Weston was the first to create the Edwards-Sanders free Improv rhythm section (Mercury Concert 1999). The two have continued to work together. Paul Rogers is another frequent partner. He also records and performs with Paul Dunmall’s band. The drummer appears in projects by Elton Dean, Gail Brand (the band Lunge), Dudu Pukwana, and Chris Batchelor/Steve Buckley. He is also a member the London Improvisers Orchestra. His most prominent engagement was with Jah Wobble, who participated in his world-dub project which included Bill Laswell as well as musicians from Laos. This tour took him all over the globe and introduced him to a new audience. He was also featured on tracks by David Sylvian. Allmusic