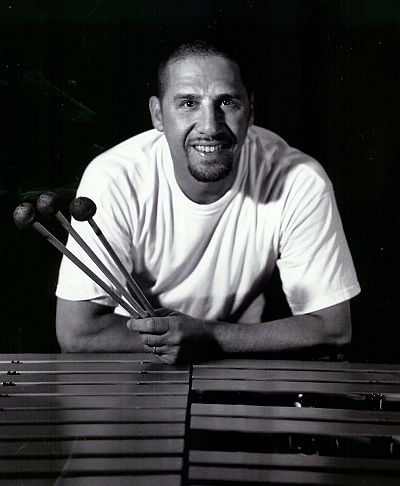 This bio does not include Mark Sherman, an Associated Press reporter. The Mark Sherman profiled here is a jazz composer/vibist with a post-bop/hard beat orientation. The Mark Sherman, who also plays electric keyboards, marimba and drums, has been heavily influenced by Bobby Hutcherson. Mike Mainieri and Gary Burton are also direct or indirect influences. Sherman’s vibes solos also show some Cal Tjader’s sophistication. Sherman was born in New York on April 17, 1957. Sherman was a teenager who attended the High School of Music and Art. He hoped to be a jazz drummer and Elvin Jones was his hero. Sherman studied drums with the post-bop legend. Sherman eventually switched to the vibraphone as his primary instrument. He recorded Fulcrum Point for Unisphere in 1980, when he was 23, and it became his first album as a leader. Sherman met Wynton Marsalis while he was studying at Juilliard School of Music. Marsalis had been recording for Columbia Records and introduced Sherman to A.