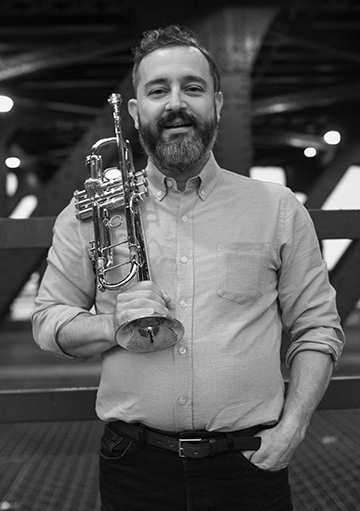 Markus Rutz is a trumpet player with a bluesy, soulful tone and a tone that’s been described as beautiful. He composes music from Chicago, Illinois, where he performs with Latin jazz bands and pit orchestras in musical theater. Markus has released two albums featuring original compositions since 2012. Each Markus is joined by great Chicago talent, including Scott Hesse, Scott Hesse, Dennis Luxion and Chris Madsen, drummer Isaiah Spencer, Chris Madsen, guitarist, and Scott Hesse. Second Impression, the latest release, also features a collaboration between Brice Winston (terence blanchard band) and Markus. It’s Cooler by the Lake (2012) features The Neutral Ground and Figure 8, which are both favorites of local musicians at Chicago jazz clubs like Andy’s Jazz Club and The Jazz Showcase. Markus was born in Chicago and moved to Colorado with his family. He then settled in Marshfield, Wisconsin, where he was taught by Robert Biederwolf, University of Wisconsin- Marshfield. Markus was 14 when he discovered Kind of Blue by Miles Davis. He then began to listen to small-group jazz. This was a significant influence on his conception and Miles was an early influence. Other musicians were also influential in his style: Fats Navarro and Clifford Brown, Lee Morgan, Art Farmer, Clifford Brown, Clifford Brown and Clifford Brown. Markus began his formal education at the University of Wisconsin- Madison, where he was taught by John Aley, a trumpet professor, and Richard Davis, a bassist. These lessons were lifelong treasures. This also helped Markus discover his true passion, jazz. Markus moved from Wisconsin to pursue his passion in New Orleans, where he studied and lived for nearly five years. He learned from Victor Goines, Harold Battiste, and Ellis Marsalis at the University of New Orleans. Markus embraced the culture and music of the Crescent City and integrated it into his own life. He played, learned and lived alongside long-time friends Brice Winston and Christopher Thomas. Markus returned to Chicago in the latter part of his life and has made Chicago his home. His most recent compositions are about the Midwest, urban and rural, and its long and distinguished jazz history. from www.markusrutzmusic.com