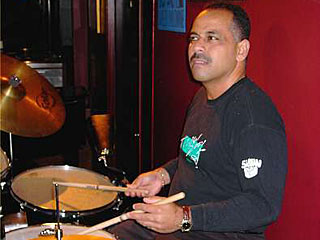 Marlon Simon is a prominent figure in Latin American culture. His tireless work ethic and drive have brought Latin Jazz to many stages across the U.S.A. Canada and South America. His hundreds of seminars and workshops are offered annually to students from all walks of life, including those in low-income public schools in New Jersey and Pennsylvania. He also has the privilege of being an educator. Marlon is a native Venezuelan who grew up in a world of Afrocaribbean rhythms. He arrived in the USA in 1987 to pursue Jazz music studies. In 1991, he received his Bachelor’s Degree from the New School for Social Research. He began performing in New York and Philadelphia, developing a unique style that was admired by some of the most prominent musicians in the field, such as Hilton Ruiz and Jesus Chucho Valdez. Although his name is mentioned on many projects, it was 1994 that he decided to start his own band, The Nagual Spirits. This gave him the chance to experiment with Latin Jazz rhythms and other approaches. He is the leader of Nagual and has been a part of four highly acclaimed projects that feature a wide range of original compositions. Marlon Simon Latin Jazz French project is also a parallel to his nagual spirits. The project was started by Black Chantilly, a French band who invited Marlon in 2005 and 2004 to give workshops on Afro Caribbean drumming and Latin Jazz composition. This unique Latin Jazz project was born out of the dedication, respect and hard work of these French musicians. Marlon projects were reviewed in Latin Jazz books, newspapers, and publications in the USA and Canada, France, Canada and Poland.