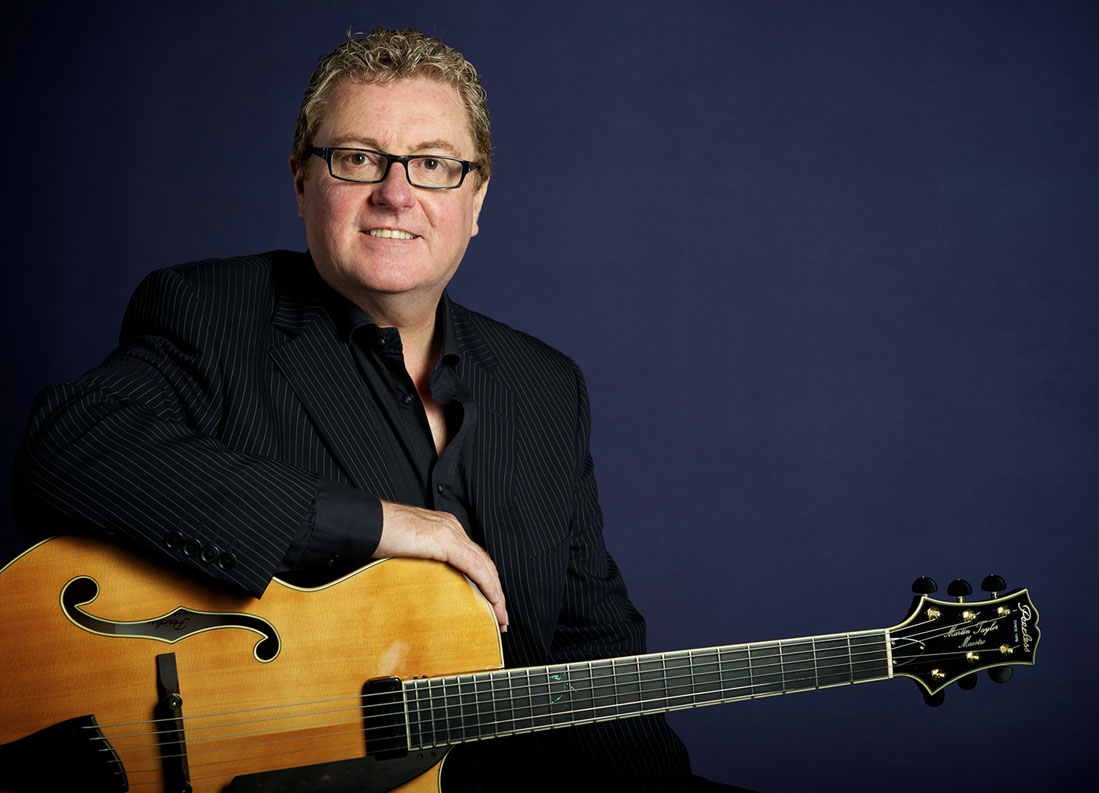 Multi-award winning composer and guitarist MARTIN TAYLOR has carved a unique musical path as an internationally acclaimed musician. His distinctive style has made him the world’s most prominent exponent of solo jazz guitar. He is completely self-taught, but he has had a remarkable musical life that spans five decades. His unique style of playing the guitar is often copied by other guitarists around the globe. He is a guitar innovator and a great concert performer. His solo shows combine virtuosity with emotion and humor with strong stage presence. He spends a lot of his time traveling around the globe, performing in concert halls across Europe, North America and Japan. He has recorded solo concerts as well as collaborations with musicians from many musical genres, including Jeff Beck, Chet atkins, Bill Wyman and George Harrison. He toured the globe and recorded more than 20 albums with STEPHANE GRAPPELLI, a French jazz violinist. In 1987, their album “Together At Last” with Vassar Cllements won a Grammy Nomination. He was described by Monsieur Grappelli as “A great musician, rich in talent, and elegance.” His groundbreaking solo album ARTISTRY, which Steve Howe produced, was released in 1992 to high critical acclaim. He was No. 1 on the HMV Jazz Charts for 12 consecutive weeks, launching his solo career. He recorded several albums for The Guitar Label after two highly successful albums for Sony/Columbia: KISS AND TELL, and NITELIFE. He was elected an honorary doctor of The University of The West of Scotland in 1999. In 2002, he was named MBE for “Services to Jazz Music” in The Queen’s Birthday Honours List. This was a personal award that he received from Her Majesty The Queen during an investiture at Buckingham Palace. He was awarded the BBC Radio 2 “Heart of Jazz Award” in 2007 in recognition of his music career. In 2002, he received a Lifetime Achievement Award by the North Wales Jazz Festival for his “Contribution to Jazz Guitar Worldwide”. He also received 14 British Jazz Awards as a guitar player and was nominated in 2009 for the BBC Folk Awards for the “Best Contemporary Song”. He was made an honorary doctor of music by the Royal Scottish Academy of Music and Drama in 2010. He divides his time between California and Scotland, where the Martin Taylor Guitar Academy is located. He has starred in films such as “Milou En Mai”, a French comedy, directed by Louis Malle. His composition “Green Lady”, which he composed, was featured in “The Killing of John Lennon” with Andrew Piddington. His TV credits include the theme music to “After You’ve Gone”, featuring Nicholas Lyndhurst, Celia Imrie, and “Nicole-Papa” television commercials for Renault Clio. Guy Barker and his recent collaboration saw the debut of their “Spirit of Django Orchestral Suite”, which they performed in November 2010 together with the Royal Liverpool Philharmonic Orchestra. He is also a musician and is involved in many charities, including the Child Bereavement Charity. He is also Patron of the My Wish Foundation of Sri Lanka and is Vice President of Scotland’s Buddhist Vihara. You can find his autobiography, Martin Taylor- Autobiography Of A Travelling Musician”, and his latest album, “Double Standards” here. Martin Taylor Guitar Academy was launched online in 2010. His innovative online guitar school, based in Napa, CA, is one of the most well-known online teachers in the world. It has been featured on NPR and Fox News, Fox News, and the LA Times. Subscribers from over 58 countries have already signed up. from http://martintaylor.com