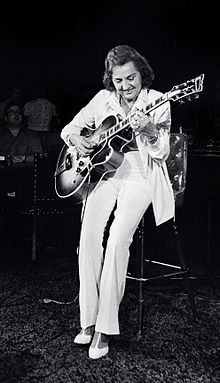 Mary Osborne was an accomplished electric guitarist, a forward-thinking, madly swinging, and inventive player. One can also hear her original musical inspiration, Charlie Christian. She also embodied the grace notes and humor of Les Paul. She was also one of a few women who could break the jazz gender barrier in her time, though she didn’t get the recognition she deserved. Osborne was a talented musician growing up. She played the violin in school orchestras and performed on guitar, bass and violin with a trio. After seeing Charlie Christian perform with Al Trent’s band at Bismarck, Osborne decided to concentrate on the electric guitar and became one of jazz’s most prominent exponents. With a variety of bands, including Buddy Rogers and Dick Stabile, Terry Shand and Joe Venuti, as well as Russ Morgan, she toured the country with them. She recorded with Mary Lou Williams, Coleman Hawkins and Mercer Ellington, Wynonie Harris, and was encouraged by Leonard Feather (producer/critic). From 1952 to 1960, Jack Sterling’s daily CBS radio show featured her. Osborne eventually settled in Bakersfield with her husband, where she still played gigs occasionally. She was still a powerful guitarist even after her death. In 1990, Osborne performed with Lionel Hampton at Playboy Jazz Festival. You can hear her on the Williams-Booker tracks of Bluebird’s The Women: Classic Female Jazz Artists CD. Allmusic