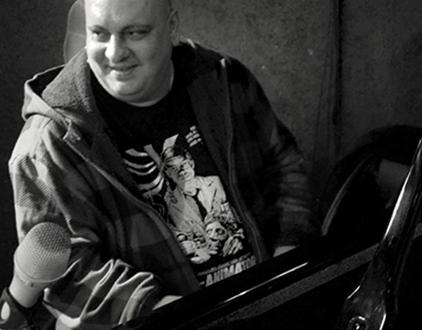 May 16th 1965 in Genoa, he was born “The darkest of Italian pianists”. He studied piano under Maestro Flavio Crivilli and started his career working with musicians from Genoa, particularly Piero Leveratto. He was invited to the USA for the first time in 1993. Red Holloway and Albert “Tootie,” Heath perform together on a West Coast tour. He also founded the “We love Jazz” Workshop in 1994, which has since grown to be one of Europe’s most important jazz education events. He was hired by Monad Records in New York in 1994 and returned to the USA as the pianoplayer and music director for Shawnn Monteiro’s group, Keter Betts (and Bobby Durham) in 1994. He has been a part of several European tours with the Nat Adderley Quartet, which is composed by Walter Booker, Jimmy Cobb, and Antonio Hart. He joined Archie Shepp’s Quartet “Just in Time”, Wayne Dockery, and Bobby Durham in 2001. He has been the artistic director of the jazz division at AZZURRA MUSIC since 2001. He was a performer at the 2003 “Jazz Piano Festival”, Lucerne. He played in Japan in November 2004, where his albums are still a bestseller. He has played in Italy and France, Germany. Corsica, Switzerland. Hungary. Austria. USA. Sweden. Denmark. Norway. Finland. Dubai. Luxembourg. Spain. Japan. Yugoslavia. Canada. He recorded 12 cds for Venus Records, the famous japanese label of jazz. More than 200 CDs have been recorded with foreign and Italian musicians. Visit www.massimofarao.com