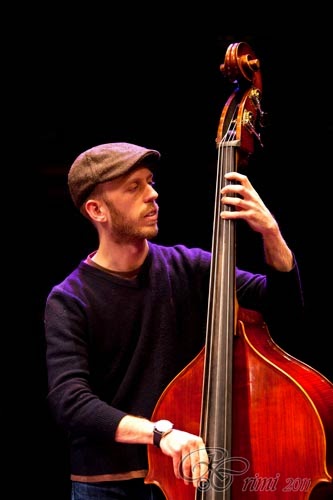 Matt was born in Albuquerque and learned to play bass at an early age thanks to his father Paul. At the tender age of 12, the child prodigy began performing on the local stage and was even invited to perform at the Grammy awards at the tender age of 16. Matt graduated from the Interlochen Arts Academy and spent two years at Juilliard School before he left to pursue his professional career. Matt is a highly sought-after bassist who has performed with many international groups including Steve Coleman, Gonzalo Rubalcaba and Steve Osby. He was awarded third place at the 2009 Thelonious Monk International Jazz Bass Competition. After performing at The Gallery in many configurations over the years, we asked Matt to be a part our 2012 Composers’ Series. (more info here). Two interviews we conducted with Matt (here and here), about his inspirations, experiences, and thoughts during this time can be found here and here. Matt created a collection of work over the course of his residency that he will likely use in Friday’s performance. This group has similar instruments and collaborators as Matt’s residency. They include the saxophonists Steve Lehman, Kyle Wilson, the guitarist Mike Moreno and David Virelles and Craig Weinrib, the drummer. from http://www.jazzspeaks.org