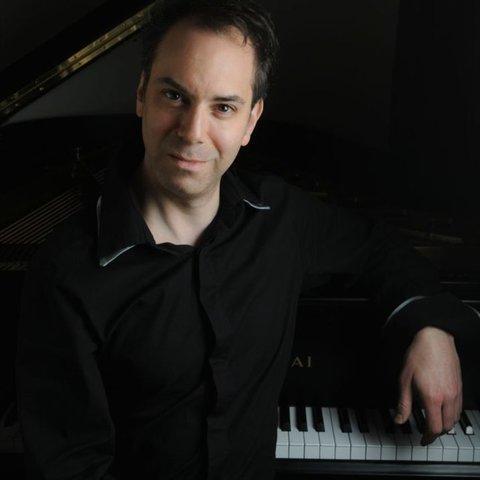 Matt Herskowitz, a native of Albany, is a graduate of New York’s Juilliard School and Philadelphia’s Curtis Institute of Music. Since 2000, Montreal (Quebec), has been his adopted home. His 2007 solo piano album, Matt Herskowitz Plays Gershwin(Disques Tout Crin) showed that he is a talented musician deserving of greater recognition. It featured solo arrangements of “Rhapsody in Blue,” Concerto in F and “Cuban Overture.” Matt also performed on the soundtrack to the Grammy-nominated film The Triplets of Belleville. In the film, he performs Bach’s Prelude to C minor, loosely posing in Glenn Gould. He also performs his Bach a la Jazz, a jazz arrangement the same Bach prelude that is featured on the award winning soundtrack CD. He premiered Undertow, his piano concert with the Absolute Ensemble, at the Bremen International Musikfest in Bremen in 2008. In 2010, he recorded the ambitious Jerusalem Trilogy. This unique mix of contemporary jazz and classical styles combined with an unusual blend of Arab and Jewish grooves and scales, was released in 2010. The pianist-composer, who is also the author of the Jerusalem Trilogy, presents the art of solo piano at Upstairs. Recorded in Montreal’s Upstairs Jazz Bar, it was recorded in front of a live audience.