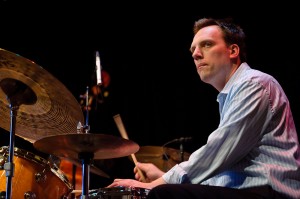 Matt Jorgensen, who moved back to Seattle from New York in 2002, has been involved in all aspects the Seattle jazz scene. With his band Matt Jorgensen 451, he has recorded four CDs. He has also toured extensively, from New York to Los Angeles. In 2003, he won the Earshot Jazz award for “Best Acoustic Jazz Band”. He is often called upon by a number of musicians, including Eric Alexander, Bill Mays and Vincent Herring. Matt is the founder and co-Artistic director of the Ballard Jazz Festival. He has also produced jazz concerts with Bumbershoot, among others. Jorgensen’s new CD, Tattooed by Passion, is inspired by the paintings of his late father-in-law, the prominent abstract-impressionist artist Dale Chisman. Jorgensen created a record of his original work, drawing inspiration from Chisman paintings and Denver, where he has lived for many years. He also draws on his long-standing friends and constant reinventions as an artist. Jorgensen and his longtime collaborators, trumpeter Thomas Marriott, and saxophonist Mark Taylor, create a recording that accurately reflects the power and scope of Chisman’s works. They also explore new musical textures and musical landscapes with the help of Corey Christiansen’s guitar playing, bassist Dave Captein and string quartet orchestrations. from http://mattjorgensen.com