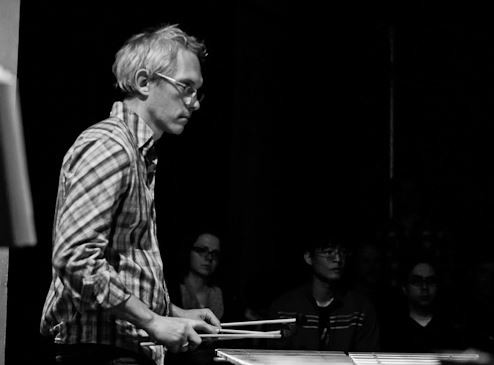 Matt Moran, a vibraphonist and tunesmith, “plays the vibraphone as a speed-chess expert, always darting off to flurries of inventive, unexpected activity.” (Village Voice). He has recorded and performed with many artists, including Mat Maneri and Lionel Hampton, Combustible Edison and Ellery Eskelin. Moran’s sound is a key component of a group of innovative New York musicians that blur the lines between composition, improvisation, folk music, and traditional sounds. In 1995, Moran earned a Master’s in jazz composition at New England Conservatory. At NEC he studied with the visionary composer and multi-instrumentalist Joseph Maneri, and has continued to learn from Maneri through performances with him. He has been performing as both a leader and sideman since 1995 when he moved to New York. Festival, the JVC Jazz Festival and the Panasonic Village Jazz Festival. He also led tours throughout Europe and the U.S. TimeOut New York lauds Moran and his associates for their “unusual breadth and wonderful consistency that making it ‘jazz’ is a misleading way to describe it.” They don’t play whirring virtuosity, though that is a part of their performances, or the mysterious quality of’soul’ in their performances. The musicians try to go beyond the normal patterns they are used to. Moran is also active as a teacher, performer, and curator in Balkan folk music scene. He plays traditional percussion alongside artists Lefteris Bournias and Raif Hyseni and Demetri Tashie and other Balkan master musicians who immigrated to New York. He started “Balkan Cabaret” a downtown music venue for Balkan and Balkan-inspired songs with Slavic Soul Party! Moran is currently the leader of the Slavic Soul Party and Sideshow groups. He also performs and records with John Hollenbeck’s Claudia Quintet and Mat Maneri Quintet. http://www.mattmoran.com