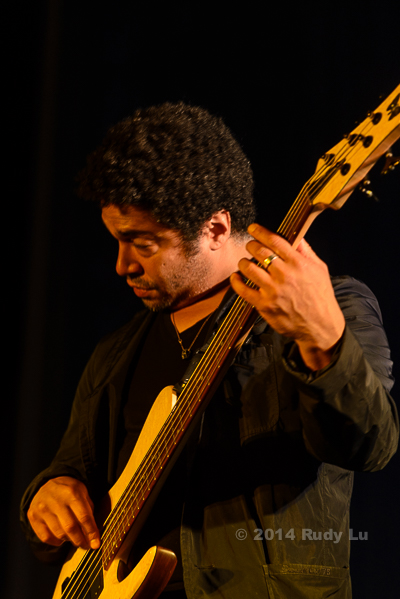 After touring with high-profile bands such as Joe Zawinul’s Syndicate and Steve Coleman’s Five Elements and John McLaughlin’s The Heart Of Things in the ’90s, Matthew Garrison earned a name for himself in jazz circles. The bass community was impressed by his speed and ability on electric 5-string fretted or fretless basses. But Garrison’s unique chordal approach to the instrument is what truly set him apart from other chopsmeisters. Matthew Garrison, the son of Jimmy Garrison, tenor sax legend John Coltrane’s longtime bassist, was a regular presence in Matthew’s life. He was born June 2, 1970. His first six years were spent in the company of musicians, dancers and visual artists. His mother Roberta Escamilla Garrison, a talented modern dancer, has a long list of impressive credits. His family moved to Rome, Italy in 1976 after the death of Matthew’s father. Matthew then began studying piano and bass guitar. He returned to the United States in 1988 and lived with Jack DeJohnette, his great jazz drummer. He studied intensely with DeJohnette as well as bassist Dave Holland during that year. He was awarded a full scholarship in 1989 to the Berklee College of Music. He began his professional career there playing with Gary Burton and Bob Moses as well as Michael Gibbs, Lyle Mays, and Lyle Mays. In 1994, he moved to New York City and was immediately snapped up by Coleman, McLaughlin, Scofield, and Zawinul. You can hear some of his fluid liner work as well as his rich chordal playing on Zawinul’s My People on Escapade/Zebra, and two McLaughlin recordings — 1998’s The Heart Of Things (both on Verve)). Garrison, who had been touring nearly continuously for five years decided to take a break from the road in 2000 to focus on his music. The self-titled and self-produced solo album is a strong statement. It puts the bass front and highlights his exceptional skills as a composer, arranger soloist, and accompanist. You can purchase the CD from his website www.garrisonjazz.com and at Fodera’s bass website www.fodera.com. Accompanied by such like-minded colleagues as guitarists Adam Rogers and David Gilmore, percussionist/vocalist Arto Tuncboyacian, drummers Ben Perowsky and Gene Lake, Tribal Tech keyboard wiz Scott Kinsey and sitarist Amit Chatterjee, Garrison shows that he is among the most gifted composer-bassists in the post-Jaco era. The bassist is a master at delivering a variety of bottom-heavy grooves. He also excels at soloing and chording pianoically. Matthew Garrison’s first album was recorded in eight months from his Brooklyn apartment. It is a massive manifesto about the art of electric bass guitar playing by one its most skilled practitioners. From www.guitar.com