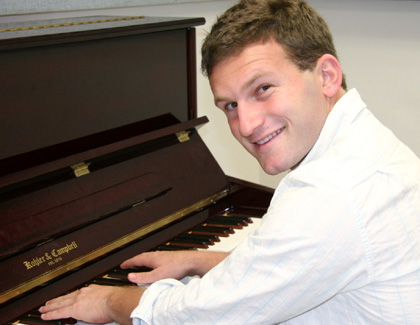 Max Haymer was raised in Los Angeles. At the age seven, he began studying classical piano and was introduced to jazz piano when he was 14. Through high school, he studied with Tamir Hendelman, a great LA-based pianist. He then continued his music education at UC Irvine. He graduated with Magna Cum Laude honors in 2007 and a Bachelor’s of Music degree. Haymer studied Jazz Performance at Irvine with Darek Ole, Bobby Rodriguez, Sherman Ferguson, and Bobby Oles. He also studied Musical Theater Direction under Dr. Gary Busby. Haymer was awarded 2nd prizes in the Montreux Jazz Festival Solo Piano Competition, as well as the Great American Jazz Piano Competition in Jacksonville Florida. He also finished in the Horace Silver Piano Competition, UWF Phillips Jazz Piano Competition, and UWF Phillips Jazz Piano Competition. The Orange County Performing Arts Center also named him a Rising Star. Haymer made his debut with his trio in 2006 at the Catalina Bar and Grill, Hollywood. Haymer has been returning to Catalina Bar and Grill every day since then, along with other Southern California venues like the bluewhale (Vitello’s), Jazz Bakery, Vibrato, and many others. Haymer’s debut album, Pickpocket Witness, was released in 2008. Haymer composed all of the album’s original songs. Haymer has had the privilege of recording and performing with many incredible artists including Jane Monheit, Big Bad Voodoo Daddy Mike Stern, Denise Donatelli, Arturo Sandoval, Jane Monheit and Big Bad Voodoo Daddy. Greg Hutchinson and Bill Holman, Crystal Bowersox and Mike Clark, Bob Francheschini and Cindy Blackman, Joel Frahm, John Ellis. Haymer lived in New York City between 2008 and 2012. He has headlined many NYC venues, including Smalls and Zinc Bar. Haymer was back in LA in 2012 and picked up where he left off. He played at many venues including Blue Whale, Vibrato (The Lighthouse), Vibrato and Upstairs at Vitello’s. Haymer also has shifted his focus to composition, production. Haymer was the Score Coordinator for “CUBAmerican.” He was mentored during this time by Carlos Alvarez, composer. Haymer recorded Hi-Def video in the studio with his trio during the summer 2016. You can see some of these videos on this website! Haymer has been performing and touring extensively with Grammy Award winner and trumpet legend Arturo Sandoval. They have performed at places like the Blue Note NYC/Tokyo/ Beijing and Newport Jazz Festival. Haymer is currently on the road with Sandoval and can be seen at various venues around the globe. Haymer was the featured piano player in Arturo Sandoval’s score for Clint Eastwood’s film Richard Jewell, 2019. From www.maxhaymer.com